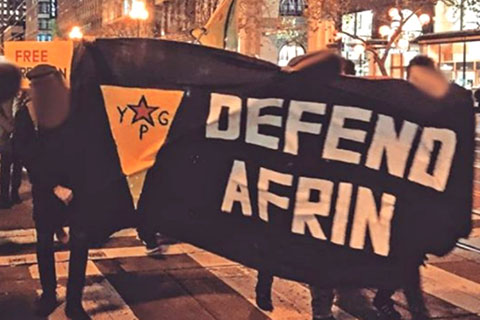 Demonstrators took to the streets of San Francisco on January 26 to march and rally in defense of Afrin and the Rojava Revolution. An audio report features several interviews with members of the local Kurdish community. They discuss the unfolding situation in regards to the Turkish invasion of Rojava and the need to support the defensive forces on the ground. In recent weeks, tens of thousands have taken to the streets around the world, holding demonstrations, occupying buildings, unfurling banners at sporting events, and taking militant actions in solidarity with the struggle in Rojava.

A flyer, created by the Bay Area Mesopotamia Solidarity Committee and distributed at the rally, states: In 2012, from within the civil war of Syria, emerged Rojava. Today, they need our solidarity to survive.

The Kurdish movement in Rojava, founded in Northern Syria, took an opportunity to assert their autonomy and put into practice ideas of a free society based upon women’s liberation, ecology and a council-driven horizontally democratic system of local communes. Although the revolution was the assertion of a criminalized Kurdish identity, it was also a proposal for the rest of us tired of feeling powerless in the face of modern capitalist society and under the rule of nationalist states.