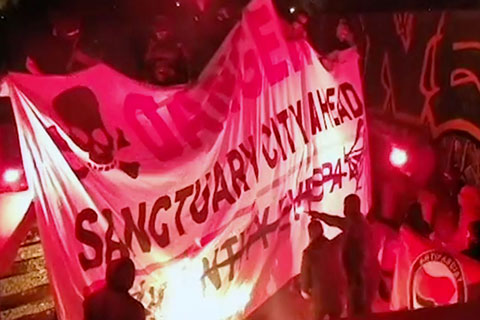 On January 28, Bay Area Antifascists made quick work of an anti-immigrant banner which the neo-Nazi group Identity Evropa (IE) hung from the Yerba Buena Tunnel heading into San Francisco. IE, and its revolving door of leaders, were central to the organizing of the murderous "Unite the Right" rally in Charlottesville, and have been active in Northern California since 2016.

In a communiqué sent to It's Going Down, San Francisco Bay Area Antifascists write: As a strike towards the defeat of our enemies, we tore down the banner put up in the early hours of the morning which attempted to “warn” commuters of “dangerous immigrants and refugees” and spread hate and fear of immigrants who call San Francisco their home.

We refuse to settle between the terror of white fanatics like Dylan Roof, James Fields, and Jeremy Christian, or their ideologues like Identity Evropa. We will not accept the “sanctuary state” of Jerry Brown, nor continued ICE raids or Trump’s disastrous wall. We will take our collective liberation, and nothing less. Sanctuary is not given, it is carved out of everyone’s desire to be safe and free, and for that desire to be respected.