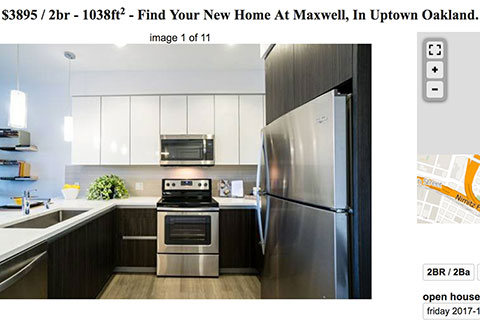 According to a report by the Urban Displacement Project of UC Berkeley, between 2013 and 2015 the pace of gentrification and displacement in Northern California accelerated most quickly in Oakland’s low-income neighborhoods. Skyrocketing rents reveal the need for strong rent control and just cause eviction protections in Oakland and throughout the Bay Area. According to the New York Times, Oakland’s median rent for the year 2016 was among the highest in the nation, just shy of the median rent in Manhattan.

During August of 2017, the average market rate rent for a one bedroom unit was $2,400 per month in Oakland, but since then, according to Zillow, the current median rent in Oakland is up to $3,000 per month. As an example of the latest outrageous rental units available, a recent listing on craigslist has an Oakland downtown apartment owner demanding $3,895 per month for a 2 bedroom unit at Maxwell, "the ultimate in boutique apartment living."