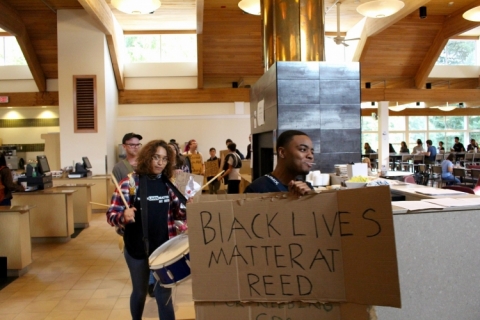 For over fifteen days, tents, couches, tables of food, and dozens of students have decked the halls of Eliot Hall, Reed College’s administration building in Portland, Oregon. Students are occupying the building in protest of the college's financial ties to Wells Fargo. Demonstrators say the college holds around $300,000 in the bank on a daily basis. Wells Fargo is an American international banking and financial services holding company well known to be one of the primary investors in private prisons, immigration detention, the Dakota Access Pipeline, police foundations and the Israeli Apartheid, among other oppressive institutions.

The protesters are part of a student organization called Reedies Against Racism (RAR), a black-led activist group that has highlighted more than thirty ways the school is complicit in racism, both institutionally and, as in the case of Wells Fargo, nationally and globally. Last year, RAR pressed the college for twenty-five demands, and, despite administrative obstructionism and threats, was successful in bringing many of them to fruition. These successes included making Reed the first college campus to be a legal sanctuary for immigrants, accelerating the creation of a Comparative Race and Ethnics Studies department at Reed, hiring more black faculty, the creation of five social justice positions around campus and ratifying an anti-racism statement.

While student protestors were condemned by the school during last year's protests, the changes were subsequently praised by the college. During this year's protest, Reed College Vice President of Student Services Mike Brody and Dean of Students Bruce Smith issued a no-contact order against members of RAR, particularly organizers of color, banning them from occupying the offices of two administrators on counts of “harassment”. Black students were told they were “breaking and entering” into the office space even though they walked through an open door with a sign that says “come in.”