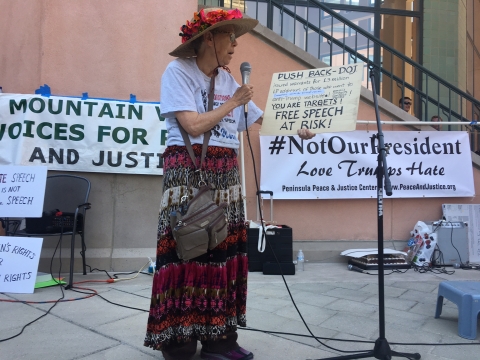 Federal prosecutors say the website DisruptJ20.org was used to plan a violent anti-Trump riot on Inauguration Day in Washington, D.C. Initially the US Department of Justice (DoJ) demanded that the site’s web host, DreamHost, turn over extensive data including IP addresses, which identify a specific computer. Shocked by the broad search warrant sought by the DoJ, activists called for push back against the government, citing the risk to free speech. They said that such information, were it to be collected, could be used to identify any individuals who used the website to exercise and express political speech protected under the Constitution’s First Amendment.

Free speech advocates are dismayed that, although the demand for 1.3 million IP addresses was dropped, the prosecution is still requesting a substantial amount of data from DreamHost. In preparation for the jury trials of more than 100 demonstrators to be held in October, the government is trying to build a case that proves the Inauguration Day protesters premeditated and organized violent demonstrations.

In Mountain View, California, on August 19, protesters at a rally rebuking white supremacist groups that staged violent demonstrations in Charlottesville, Virginia, called for free speech advocates to oppose the Justice Department’s witch hunt. After DreamHost and activist organizations complained that the warrant was a clear abuse of government authority, on August 21 the DoJ narrowed the scope of the warrant, eliminating the request for IP addresses.

On August 24, Superior Court Chief Judge Robert E. Morin ruled that DreamHost still needs to disclose some information about the operators of disruptj20.org. The government claims that the site was used “to coordinate and to privately communicate among a focused group of people whose intent included planned violence".