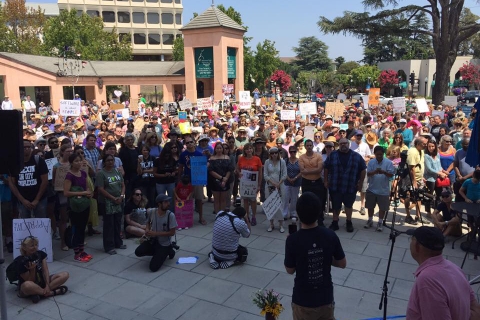 Right-wing protest organizer Jack Posobiec cited “credible alt-left terrorist threats” as the reason for postponing an extreme right march at Google headquarters in Mountain View scheduled for August 19. Cause célèbre for the alt-right, former Google software engineer James Damore inspired the protest when he was fired for penning an internal memo in which he argued that the low number of women in technical positions was a result of biological differences.

Despite the postponement of the alt-right demo, demonstrators carried on with a counter protest on August 19. At the city's central plaza in downtown Mountain View, women sang a song they wrote about extreme conservative support for Damore at an open mic. A young woman carried a sign that read, “This is the Bay Where Women in Tech Slay." Other signs called for an end to discrimination against women employed in tech. One of the main sentiments expressed at the rally was solidarity with anti-fascist demonstrators in Charlottesville, Virginia, after one was killed on August 12.

The counter demo was called “Rally for Human Rights, Dignity, Equality”; it was an opportunity for the community to demonstrate against racism and sexism. As of yet, no date has been set for another alt-right protest at Google Headquarters, but activists on the San Francisco Peninsula said they will organize to oppose the extremist right when and if one is announced.

Related Feature: Solidarity Across the Country After Nazis Murder & Attack Anti-Fascists in Charlottesville