Add an Event
Newswire
Calendar
Features
Home
Donate
From the Open-Publishing Calendar
From the Open-Publishing Newswire
Indybay Feature
Publish to Newswire
Add an Event
Related Categories: Peninsula | U.S. | Global Justice & Anti-Capitalism | Media Activism & Independent Media | Police State & Prisons
DoJ Targets DreamHost, Activists Call for Push Back
by Mary Smith
Saturday Aug 19th, 2017 11:45 PM
Raging Grannies member Trudy Reagan was shocked by the broad search warrant sought by the Justice Department targeting DreamHost. She called on activists to push back against the DoJ at a rally in Mountain View, CA today to the cheers of fellow activists. The rally was called to rebuke white supremacist groups that staged violent demonstrations in Charlottesville and counter a scheduled (but postponed) March on Google. 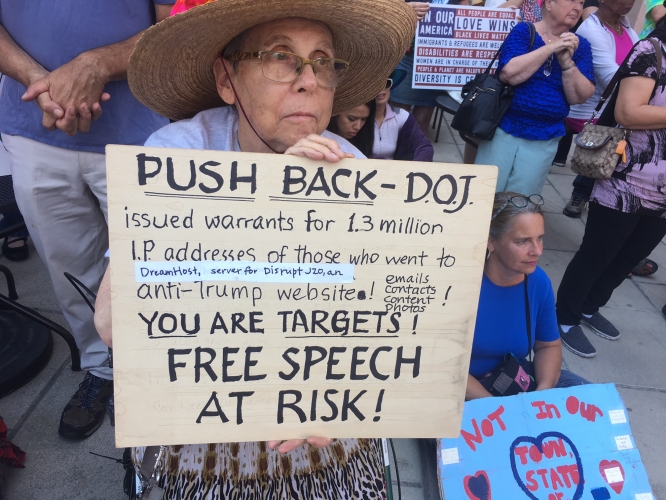 original image (2016x1512)
A Raging Granny shocked by the broad search warrant sought by the Justice Department targeting DreamHost, an internet hosting company based in Los Angeles, called on activists to push back against the DoJ. Granny Trudy Reagan seized an open mic opportunity to speak out at a Mountain View, CA rally yesterday. Mountain View Voices for Peace and other social justice organizations organized the rally in response to the planned appearance of a right wing "March on Google" in that city. (That march was ultimately postponed due to right wing organizer Jack Posobiec's stated fears of "alt-left terrorism".)

DreamHost hosts disruptj20.org, a website that helped organize anti-Trump protests on Inauguration Day. The Justice Department has demanded that DreamHost turn over “all records or other information” relating to the site and personal information including I.P. addresses. Federal prosecutors are also seeking all emails, photos and other content sent to and from the site.

Granny Trudy spelled out the risk to free speech that this creates. She said that information, were it to be collected, could be used to identify any individuals who used the website to exercise and express political speech protected under the Constitution’s First Amendment and that people just like demonstrators at the Mountain View rally were targets. Her speech was a call to Action. So far DreamHost is refusing to hand over the IP addresses of 1.3 million of its users who visited the site. DreamHost says that when it was first approached by the DoJ, it asked why the request was so broad. Rather than explain to DreamHost, the Justice Department filed a motion in court seeking to compel the organization to hand over the data.
§
by Mary Smith Saturday Aug 19th, 2017 11:45 PM 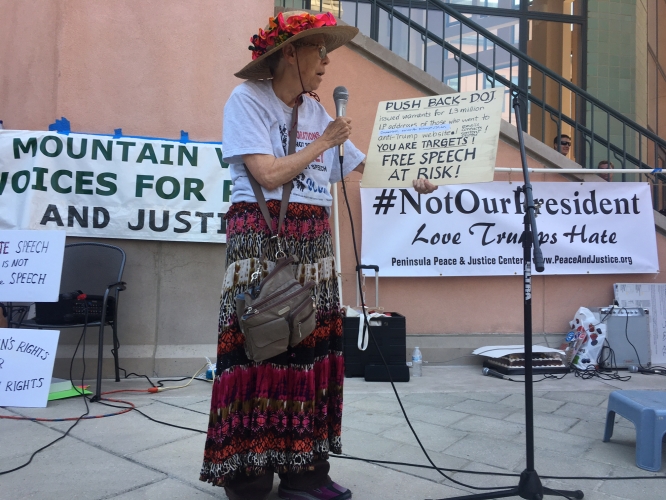