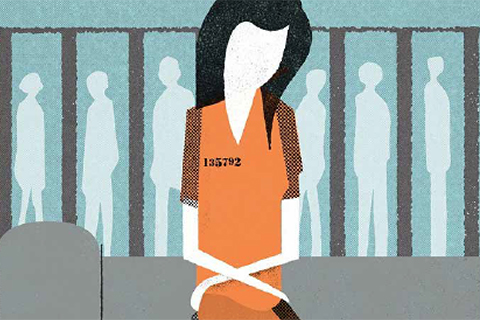 Coral Feigin & Sasha Buchert write: Despite the fact that transgender and gender non-conforming people have recently become more visible in the media and popular culture, the realities for street-based, poor, black and brown and disabled trans women remain the same. Trans people continue to face discrimination from traditional housing, employment and healthcare forcing many trans people into alternative street economies like sex work, drug sales and whatever other work people can find. As a result of being pushed out of these traditional systems, trans people, especially trans women of color, become easy targets for police violence and criminalization.

Across California, and nationally, trans people are funneled into state prisons, detention centers and county jails — often criminalized for our survival in a world that does not want us to exist. While incarceration is violent and unsafe for everyone, trans people face extreme conditions while locked up, including unsafe housing, physical/emotional/sexual assault, lack of access to basic transition health care and a refusal to be recognized by our chosen names and genders.

To address some of these issues and provide relief for our trans and gender non-conforming loved ones inside, a coalition has formed to work on legislation benefiting trans prisoners between the Transgender, Gendervariant, Intersex Justice Project (TGIJP), the St. James Infirmary, the Transgender Law Center (TLC) and the Western Regional Advocacy Project (WRAP). This year, the coalition is running SB 310: the Name and Dignity Act for Incarcerated Trans People. This bill authored by Sen. Toni Atkins (D San Diego), if passed, would make it possible for trans people in custody to file for a legal name and/or gender marker change on their identification documents and would ensure that they are recognized as such while incarcerated. While this is only one small step in demanding safety and liberation for trans people inside and outside of prison walls, it will offer some respite by forcing the prison system to refer to trans people by their true name and gender.