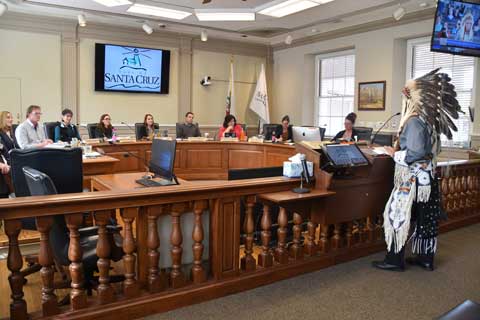 On April 4, the Santa Cruz City Council voted unanimously to adopt a resolution in support of the Standing Rock Sioux Tribe in their opposition to the Dakota Access Pipeline (DAPL). Citing​ ​DAPL’s​ ​violation​ ​of​ ​treaty​ ​rights,​ ​destruction​ ​of​ ​sacred​ ​sites​ ​and​ ​the​ ​threat​ ​posed​ ​to​ ​Standing​ ​Rock’s​ ​water​ ​supply,​ ​the​ ​city’s agenda report​ ​advised ​that​ ​Santa​ ​Cruz​ ​join​ ​the many​ cities​ across the country ​in​ ​officially “Standing​ ​with​ ​Standing​ ​Rock.”

Many who attended were indigenous from near and far. Speakers in support of the resolution included Valentin Lopez, Chairman of the Amah Mutsun Tribal Band, and Kanyon Sayers-Roods of Indian Canyon. Prayers, songs, and a drum filled the air outside the city council meeting before the resolution was adopted. After the unanimous vote several council members joined in a thank you song.

The Council’s resolution was formed as part of a collaborative effort between city officials, council members, and a coalition of Santa Cruz residents all working toward the eventual divestment of city funds from major banks funding the project. Mutually concerned over the environmental risks posed by the pipeline, as well as unjust treatment of water protectors by North Dakota law enforcement, the joint task force is looking to merge the protection of the earth with respect for indigenous sovereignty. While it would be a mainly symbolic gesture, the language used in this resolution may be put forth in legislation used to vote on divesting in the following month.