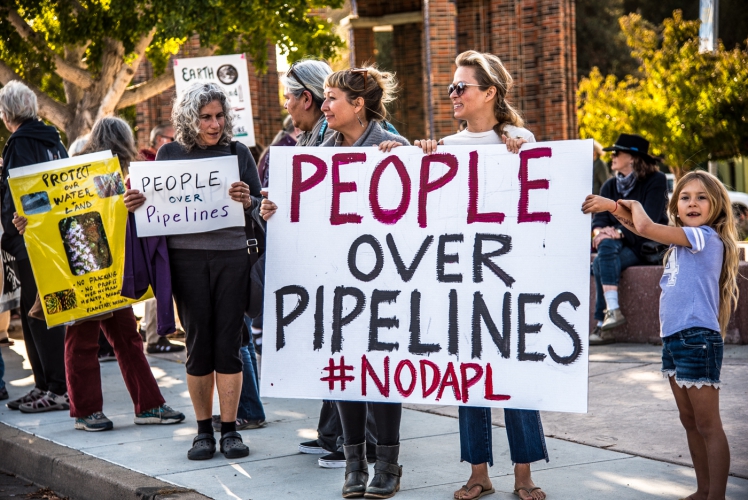 original image (1400x935)
Santa Cruz, California - A recommendation has been added to the Santa Cruz City Council’s April 4 agenda advising that the Council adopt a resolution in support of the Standing Rock Sioux Tribe in their opposition to the Dakota Access Pipeline (DAPL).

“We are standing with other cities, including Seattle, Berkeley, Oakland, and San Francisco in opposing the pipeline that will only have negative consequences for the people on the Standing Rock Sioux Reservation,” says council member Chris Krohn.

The Council’s resolution was formed as part of a collaborative effort between city officials, council members, and a coalition of Santa Cruz residents all working toward the eventual divestment of city funds from major banks funding the project. Mutually concerned over the environmental risks posed by the pipeline, as well as unjust treatment of water protectors by North Dakota law enforcement, the joint task force is looking to merge the protection of the earth with respect for indigenous sovereignty.

“This work has to be done by our generation in order to procure a liveable environment for future generations," says Paul Rubio, a Santa Cruz resident of Yoeme descent and one of the leaders of the divestment team.

The vote will come before the Council as oil begins to flow through sections of the 1,172 mile pipeline, following an almost year-long occupation of 1851 Treaty Land less than a mile from the Standing Rock Reservation in North Dakota.

Krohn sees this as a critical time for the city to show solidarity, saying "we are together standing up to fossil fuel companies’ greed and seeking to confront a system that has yielded only inequities and injustice for indigenous peoples.”

Resolving to support Standing Rock is expected to precursor a formal resolution divesting the city from major banks funding Dakota Access. While it would be a mainly symbolic gesture, the language used in this resolution may be put forth in legislation used to vote on divesting in the following month.

Following Tuesday’s vote, the divestment coalition will continue to collaborate with city officials and community stakeholders in the interest of pursuing an ethical investment policy to shape future financial decisions.

Santa Cruz Residents Rally to Stop the Dakota Access Pipeline (September 13, 2016)
https://www.indybay.org/newsitems/2016/09/16/18791328.php
Add Your Comments
LATEST COMMENTS ABOUT THIS ARTICLE
Listed below are the latest comments about this post.
These comments are submitted anonymously by website visitors.