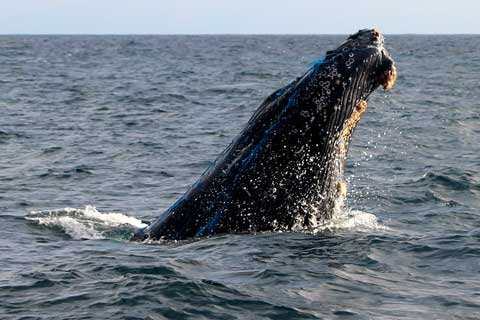 Commercial Dungeness crab gear entangled a record number of whales in 2016, contributing to a third straight record-breaking year for entanglements along the U.S. West Coast, according to information released this week by the National Marine Fisheries Service. While whale entanglements are reported up and down the coast, the Monterey Bay National Marine Sanctuary has recently seen the highest number of entanglements.

“Whales are suffering slow, painful deaths because there are too many crab traps in Monterey Bay,” said Catherine Kilduff of the Center for Biological Diversity. “When whales get tangled up in traps, they can die of starvation or dehydration. After seeing this problem reach a record level, California has to reduce the number of traps and issue emergency closures as needed to protect these beautiful animals.”

More than 71 separate cases of whale entanglements were reported last year off California, Oregon and Washington. That tops record-breaking totals in 2014 and 2015. Of those, the commercial California Dungeness crab fishery was responsible for 22 confirmed whale entanglements out of the total of 29 where fishing-gear type could be identified. Dungeness traps entangled blue and humpback whales and an orca, and crab traps were reported on entangled whales in Canada and Mexico.