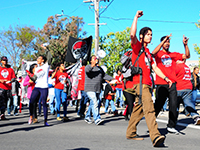 Activists in Oakland came out in the hundreds to rally and march for a $15 minimum wage on April 15, tax day. They started their protests by shutting down all of the McDonald's restaurants in Oakland with chanting, flash mobs and and banners. The San Pablo McDonald's was greeted by activists handing out over 200 free "burritos for justice" made with vegetables from the UC Gill Tract Community Farm. Protesters also received a surprise visit by former United States Secretary of Labor, Robert Reich. About mid morning, participants from all of the thirteen McDonald's restaurants marched and congregated at the 45th Avenue fast food branch. At the end of the day all gathered at UC Berkeley for a final rally and march.

The action in Berkeley began with a rally at Sproul Plaza. Participants came from actions all over the San Francisco Bay area earlier in the day, including San Jose and surrounding South Bay communities, San Francisco, and Marin County, many of which targeted McDonald's outlets. Mayor Ruth Atkins of Emeryville drew cheers from the rally crowd as she announced that on July 1, the city's minimum wage would rise to $14.42 an hour. Other area communities including Oakland, San Francisco and Berkeley have raised or are in the process of increasing their minimum wage, while State Sen. Mark Leno, D-San Francisco, has introduced a bill to raise the state's minimum. After the rally, over one thousand protesters marched through the heart of Berkeley, stopping at the downtown McDonald's, and temporarily snarling traffic.

The fight for $15 takes Oakland by Storm |