Add an Event
Newswire
Calendar
Features
Home
Donate
From the Open-Publishing Calendar
From the Open-Publishing Newswire
Indybay Feature
Publish to Newswire
Add an Event
Related Categories: East Bay | Labor & Workers
Berkeley demonstration for $15 at site of 60’s Free Speech Movement
by Marilyn Bechtel, People's World
Sunday Apr 19th, 2015 6:13 PM
BERKELEY, Calif. - Low wage workers - fast food, child and home care, security and more - were joined by dozens of area unions and community organizations Apr. 15 in a massive demonstration for $15 and a union. The action began with a rally at historic Sproul Plaza on the University of California, Berkeley campus, site of the famed Free Speech Movement in the mid-1960s. 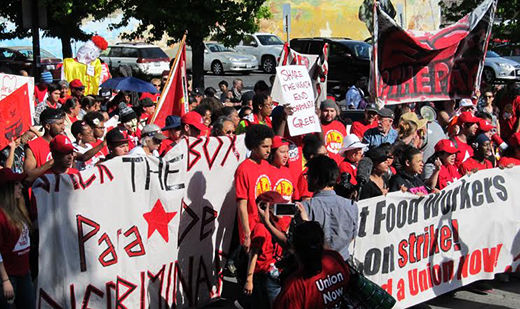 
Participants came from actions all over the San Francisco Bay area earlier in the day, including San Jose and surrounding South Bay communities, San Francisco, and Marin County. Many of those actions targeted McDonald's outlets.

Mayor Ruth Atkins of neighboring Emeryville drew cheers from the rally crowd as she announced that on July 1, the city's minimum wage would rise to $14.42 an hour. Other area communities including Oakland, San Francisco and Berkeley, have raised or are in process to increase their minimum wages, while State Sen. Mark Leno, D-San Francisco, has introduced a bill to raise the state's minimum.

Speaking in English and Spanish, Mary Kay Henry, president of the Service Employees International Union, called the Berkeley action "the exclamation point" in the Fight for $15 and said her union was participating in over 200 cities around the country.

Along with statements of support, including Alameda Labor Council Executive Director Josie Camacho's pledge that the county's 100,000 union members stand solidly with the campaign, came calls to bring struggles together across traditional organizing lines.

Sheila Tully, president of the California Faculty Association at San Francisco State University, drew attention to a low-wage constituency not always recognized: part-time, adjunct college and university lecturers, many of whom she said earn less than $15 an hour.

"I earned my Masters and my Ph.D. at UC Berkeley," Tully said, "and I can barely make a living in San Francisco." Her union stands in solidarity with fast food and retail workers, and with all faculty members, she said. "We know when we stand together, fight together, we win."

A related message was brought by Devonte Jackson of the Black Lives Matter movement. "We're seeing that not only are black people being murdered by police on the street, but we're seeing state-sanctioned violence in the gentrification and displacement of our communities, in income inequality, inadequate public schools, and a less than 3 percent black student population on this campus."

Immigration activist Maria Echaveste added: "You also need to know that this battle is across countries," noting that farm workers in the U.S. and in Mexico are oppressed by the same corporations.

Sierra Club Executive Director Michael Brune enlarged the circle further, pointing out that those worst hurt by corporate actions underlying climate change are those with the least resources. "One third of Americans live in places where it is unhealthy to breathe, every day," he said. "And the people who live in these places invariably are people being paid starvation wages. That's why the Sierra Club is part of the Fight for $15."

After the rally, over 1,000 protesters marched peacefully and energetically through downtown Berkeley, stopping at a downtown McDonald's, and temporarily snarling traffic.

Speaking on radio station KPFA's UpFront program April 15, lead author Ken Jacobs, the center's chair, said higher wages would mean the funds "could be used in a more targeted manner." He also noted that "some large companies, like McDonald's and Wal-Mart, "are effectively using these programs as a subsidy."

Jacobs said over half of fast food workers across the country are getting public assistance, as are nearly half of child care and home care workers, and even a quarter of part-time college faculty. Modest wage increases would cause a small rise in costs of goods and services, amounting to half of 1 percent overall, and less than 5 percent for restaurant meals, he said.

http://peoplesworld.org/berkeley-demonstra...
Add Your Comments
LATEST COMMENTS ABOUT THIS ARTICLE
Listed below are the latest comments about this post.
These comments are submitted anonymously by website visitors.