Please join us at OGP (Frank Ogawa Plaza) for the March to UC Berkeley where we will join forces with Bay Area families, workers, people of faith, students, artists, leaders, and community supporters as we take to the streets in the largest low-wage worker protests in modern American history

Because everyone deserves a Livable Wage!

On April 15, 2015 at 1:00 pm, the Oakland Livable Wage Assembly (OLWA) will hold a short rally in Oakland, followed by a march to the UC Berkeley campus in support of $15 and a union statewide. It will begin at Oscar Grant Plaza / Frank Ogawa Plaza, 14th & Broadway. This event is part of a nationwide day of action, with strikes, walkouts, rallies and marches being held across the country by adjunct professors, fast food, big-box, and home care workers - all those working at poverty levels - demanding a livable wage.

OLWA believes we can do better for the 99% in California. We must seek opportunities for all Californians to have a good life, to live in sustainable communities, and to enjoy the fruits of economic and social justice. We say: 'End Poverty in California!' The first step in that direction is our demand to corporate barons and the state: a livable wage for all!

Contrary to the untruths of austerity and trickle-down, more money in the hands of lower income workers is good for business because it means more money in circulation through higher consumer spending on necessities. This leads both to higher growth and to helping to meet the human needs of the poor in California. Prosperity for the many is prosperity for all.

OLWA builds community and power among those who seek higher wages and better work life conditions for area workers. We meet every 2nd and 4th Tuesday of the month at the SEIU Local 1000 union hall in downtown Oakland. We look forward to learning with you and making change for the better. 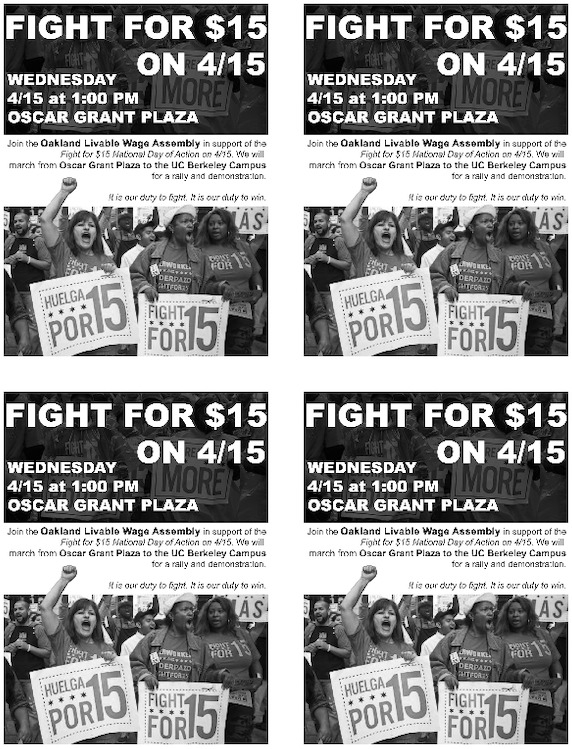 Download PDF (5.2MB)
Add Your Comments
Support Independent Media
We are 100% volunteer and depend on your participation to sustain our efforts!