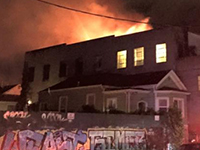 Before dawn on Saturday, March 21, a fire erupted in a warehouse on 24th Street in Oakland. Two resident artists died, Davis Letona and Daniel “Moe” Thomas. The fire quickly spread to the adjoining warehouse on 23rd Street commonly known as the AK Press warehouse. On the AK side, three residential units sustained severe damage, at least one being totally destroyed, with a beloved cat succumbing to the smoke and heat. As a result of the three-alarm fire, other units sustained varying degrees of water and smoke damage. Businesses on the first floor are struggling with major damage from tons of stinky smoke-smelling water that rained down.

AK Press lost a large number of books and other inventory. 1984 Printing lost reams of printing paper, computers, jobs in progress, and more. In all, between businesses and residents, damages easily run into the tens of thousands of dollars, probably exceeding well over $100,000. Things became worse, with a much greater number of people affected, when the warehouse on 23rd Street was red-tagged by the City of Oakland on March 23 and the AK warehouse was red-tagged on March 24, meaning no residents or businesses are allowed inside either building, even if their units were largely unaffected by the fire, leaving dozens homeless and AK and 1984 unable to operate.

There is a memorial fund for one of the victims on 23rd Street. Surviving residents and businesses on both sides greatly need assistance now, too. A new relief fund has been created that will be evenly split three ways between AK Press, 1984 Printing, and affected neighbors. Please, give whatever you can.