Add an Event
Newswire
Calendar
Features
Home
Donate
From the Open-Publishing Calendar
From the Open-Publishing Newswire
Indybay Feature
Publish to Newswire
Add an Event
Related Categories: East Bay | U.S. | Arts + Action | Global Justice & Anti-Capitalism | Health, Housing & Public Services | Labor & Workers | Media Activism & Independent Media
Devastating Fire at AK Press Warehouse: Lives Lost, Residences Destroyed, Dozens Displaced, Businesses Damaged
by Dave Id
Wednesday Mar 25th, 2015 10:11 PM
Before dawn on Saturday, March 21, a fire erupted in a warehouse on 24th Street in Oakland. Two resident artists died, Davis Letona and Daniel “Moe” Thomas. The fire quickly spread to the adjoining warehouse on 23rd Street commonly known as the AK Press warehouse. On the AK side, three residential units sustained severe damage, at least one being totally destroyed, with a beloved cat succumbing to the smoke and heat. As a result of the three-alarm fire, other units have borne varying degrees of water and smoke damage. Businesses on the first floor are struggling with major damage from tons of stinky smoke-smelling water that rained down. Both warehouses are now red-tagged, leaving dozens homeless. Please, see below for details on how you can help. 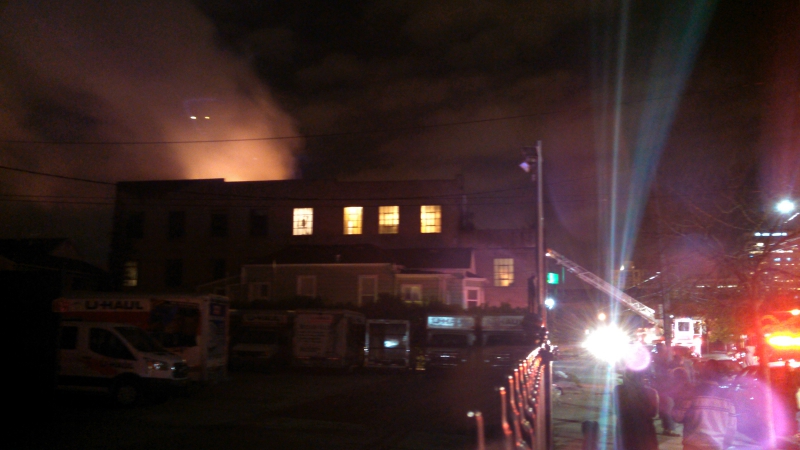 AK Press lost a large number of books and other inventory. 1984 Printing lost reams of printing paper, computers, jobs in progress, and more. A memorial fund has been created for one of the victims on 23rd Street. Surviving residents and businesses on both sides greatly need assistance now, too. In all, damages easily run into the tens of thousands of dollars, probably exceeding well over $100,000. Things became worse, with a much greater number of people affected, when the warehouse on 23rd Street was red-tagged by the City of Oakland on March 23 and the AK warehouse was red-tagged on March 24, meaning no residents or businesses are allowed inside either building, even if their units were largely unaffected by the fire, leaving dozens homeless and AK and 1984 unable to operate.


Ways You Can Help:

David Hillard Fire Relief Fund
(He and his partner lost everything in the fire, including one of their two cats.)


Please give whatever you can as costs to rebuild lives and businesses are considerable.

I received a call from two close friends who reside in the AK Press warehouse at 3:39am on Saturday morning. I thought it might have to do with one of their two cats who is older and whose health has been failing lately. They told me that there was a fire in the warehouse, that they were on the sidewalk, and to please bring cigarettes and water. I was there within minutes and saw that one of my friends wasn’t wearing shoes, having barely managed to escape the smoke and flames with one of his two cats, not knowing yet if the other one could have possibly survived.

My friend recounted how he was asleep at the time and his partner, who had been awake, began shouting about smoke in their unit. He jumped out of bed, threw on some clothes, and immediately ran downstairs, placing one of his two cats into a cat carrier as their apartment rapidly filled with smoke. He attempted to run back upstairs to grab his second cat, but by that time the smoke was so thick he couldn’t see more than a foot in front of his face. With only one pair of shoes between them, one phone, and one of their two cats, my friends were on the street.

Fire trucks had already arrived on 24th Street before my friends fled the building but firefighters had a hard time finding the fire in that warehouse. Reports are that there were no smoke alarms which would have saved precious time firefighters needed to find the original source. Eventually, firefighters pushed open a door upstairs in the back and found a raging fire. But by then, it was already spreading to the 23rd Street warehouse.

Not knowing the situation on 24th Street, my friends called the Oakland fire department to report the fire. They were told crews were already on the scene. A fire truck drove by the AK warehouse shortly thereafter and asked my friend to show them where the fire was at AK. He led a fight fighter with a gas mask on up the stairs to his unit. He saw his his home engulfed in flames, tried to say something to the firefighter about his cat being inside, but the firefighter was focused on communicating via radio to others about the exact location of the fire, preventing it from spreading further into the warehouse.

On the street on 23rd when I arrived were about two dozen residents, and workers from 1984 Printing. People were dazed and unsure what to make of the ongoing fire that could now be seen rising up out of the roof in the back of the AK warehouse. How much would burn? Did everyone make it out alive? What would happen next for them and the warehouse? 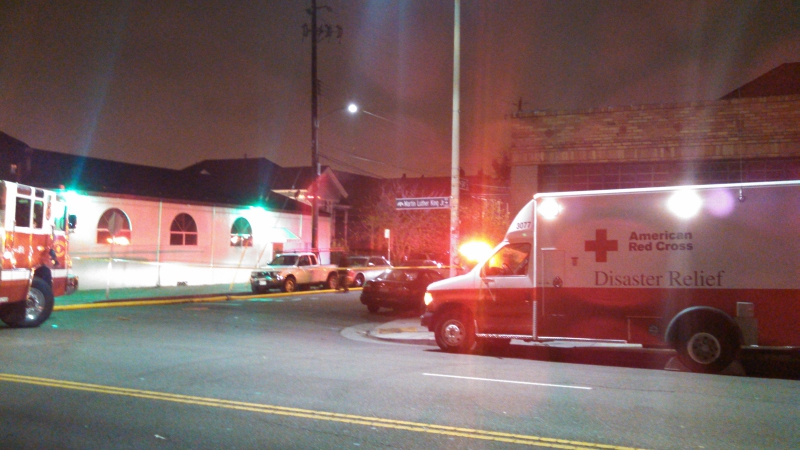 Smoke alarms heard going off in all directions as water continues to rain down. 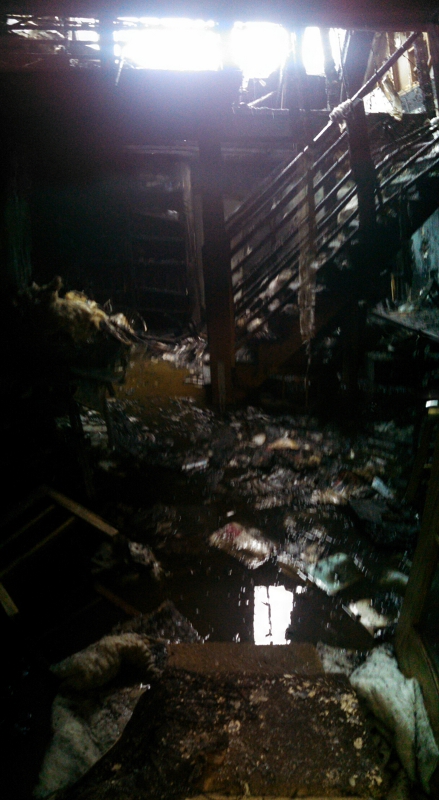 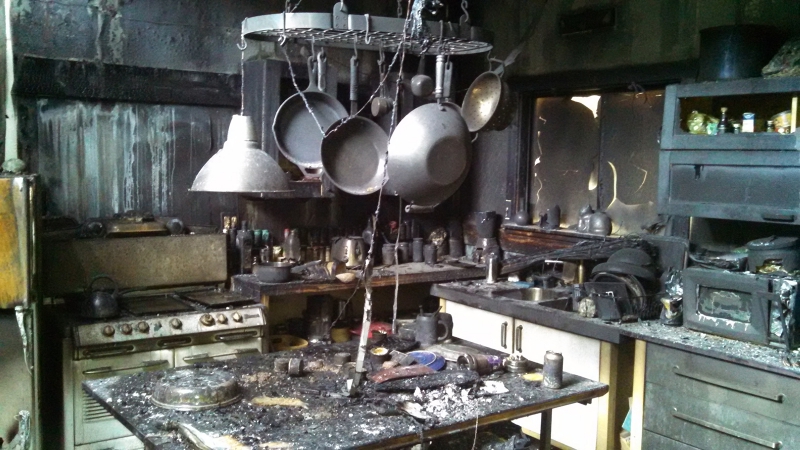 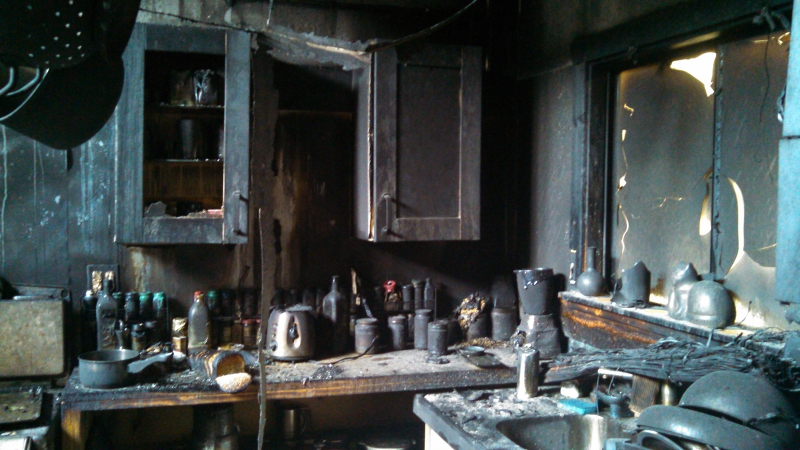 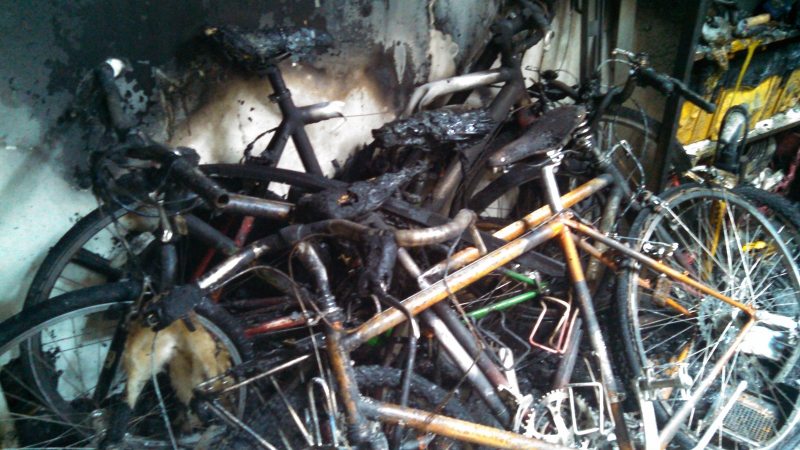 original image (1600x900)
Note the aluminum bicycle in back with melted top bar in frame. One steel-framed bike in front did not melt, but likely would have if fire had proceeded unabated for much longer. 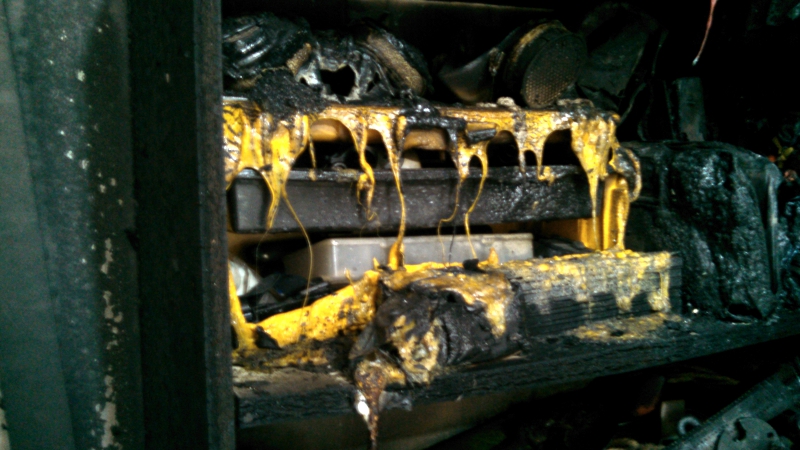 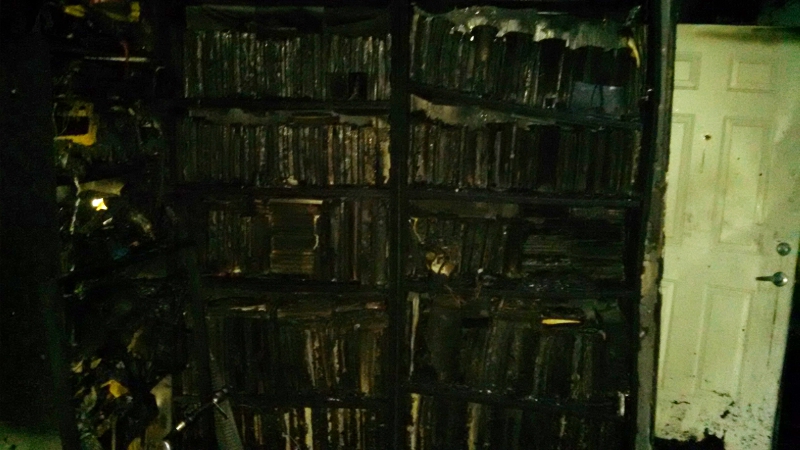 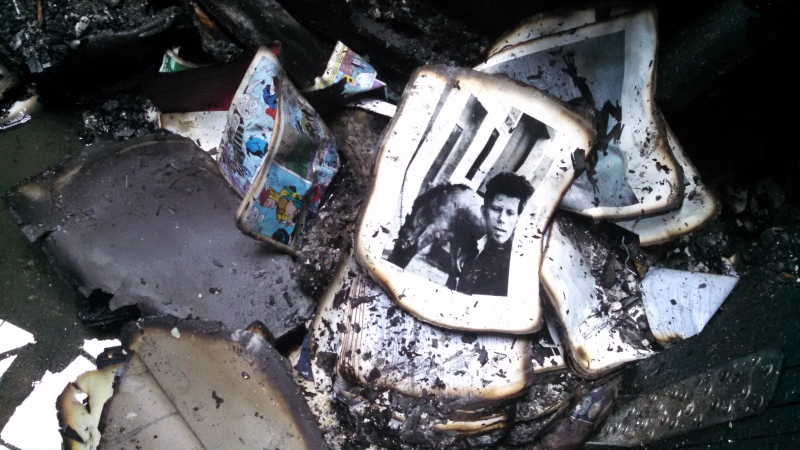 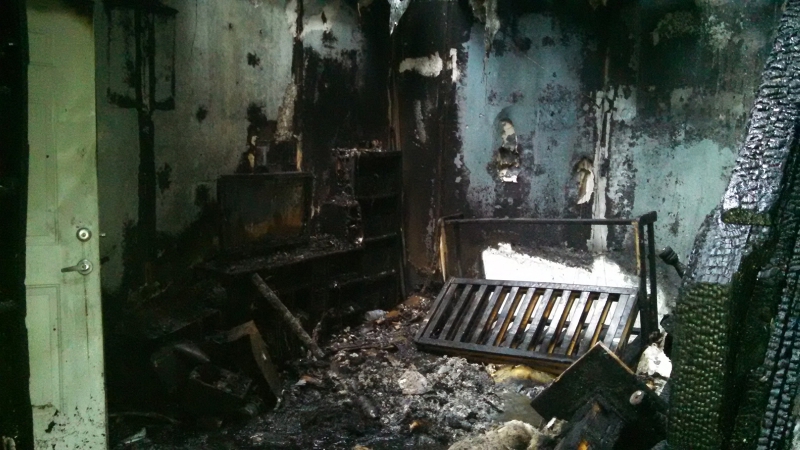 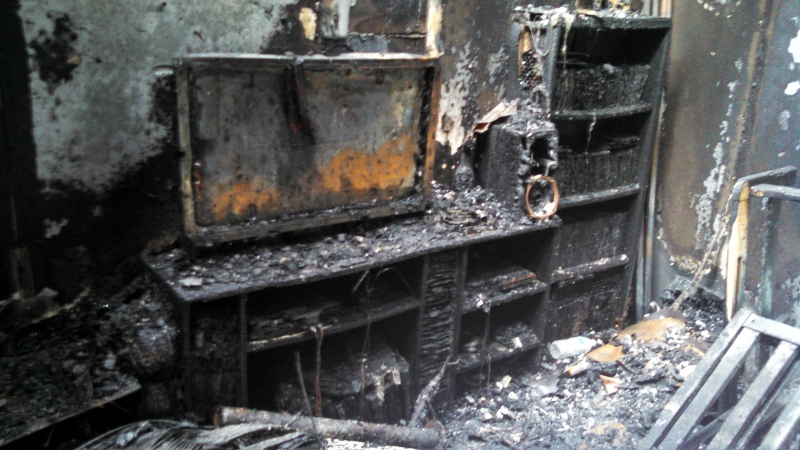 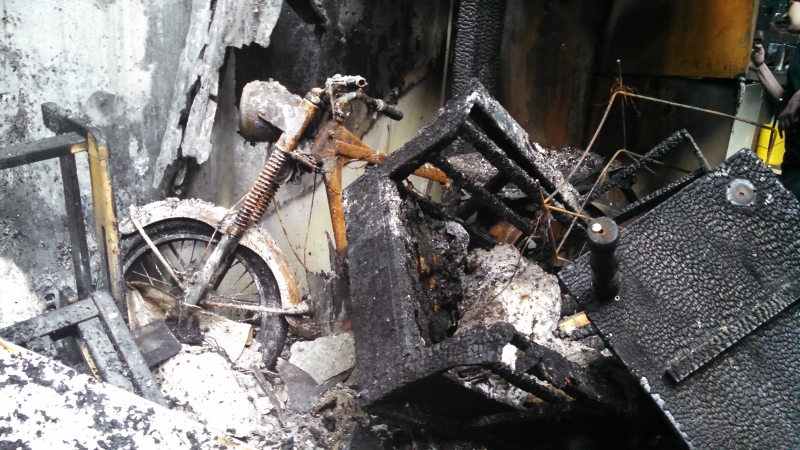 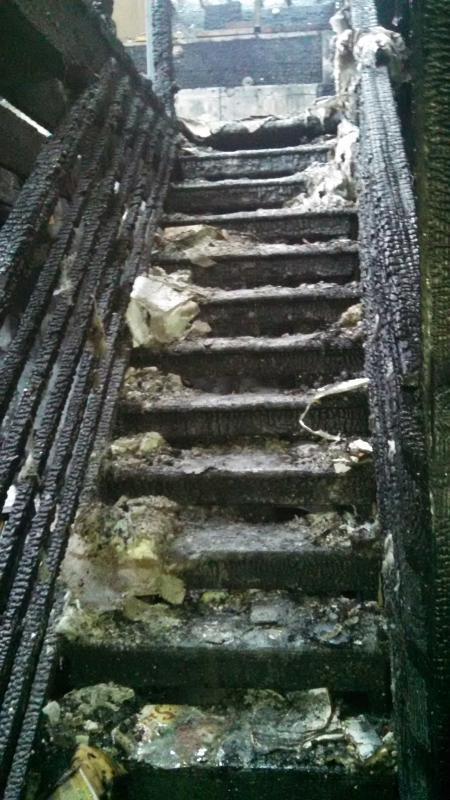 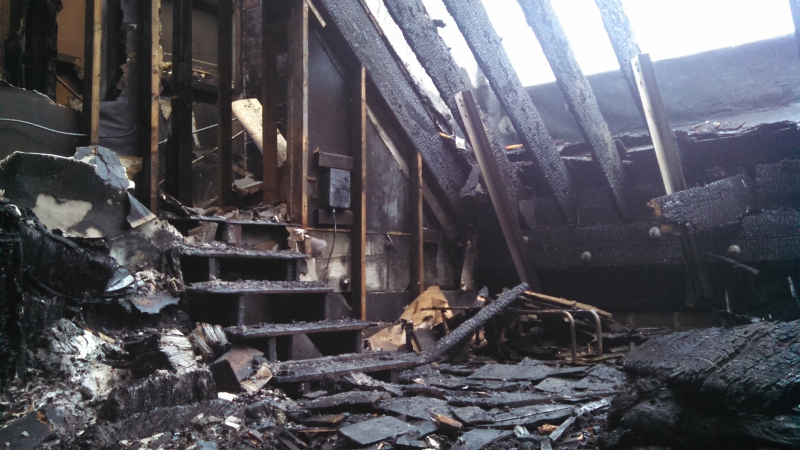 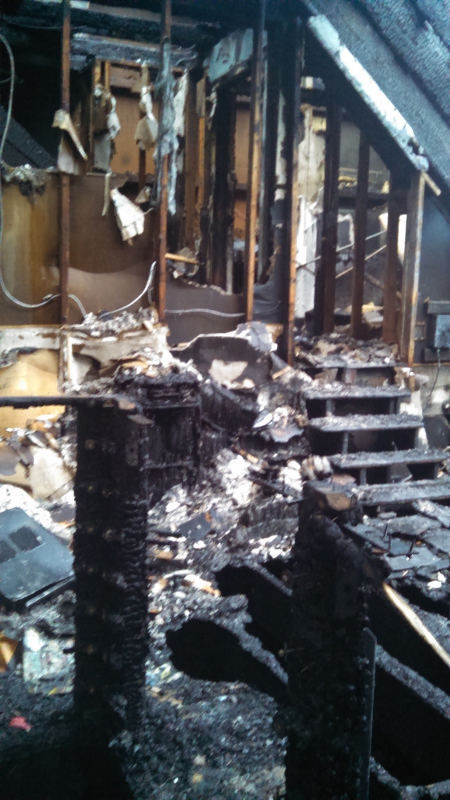 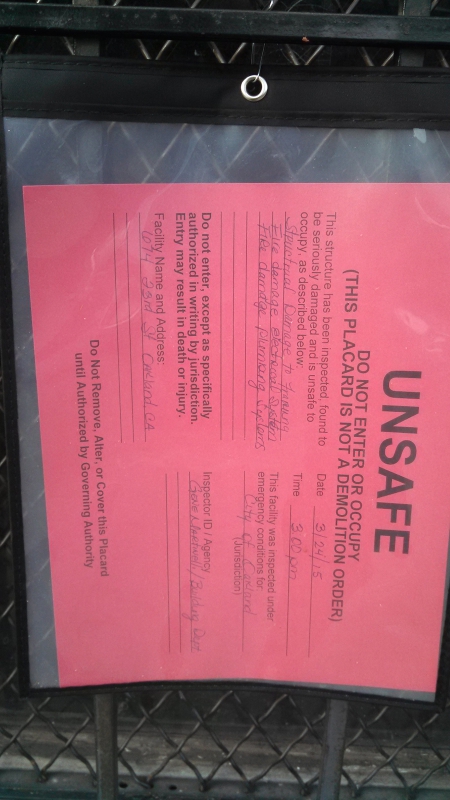 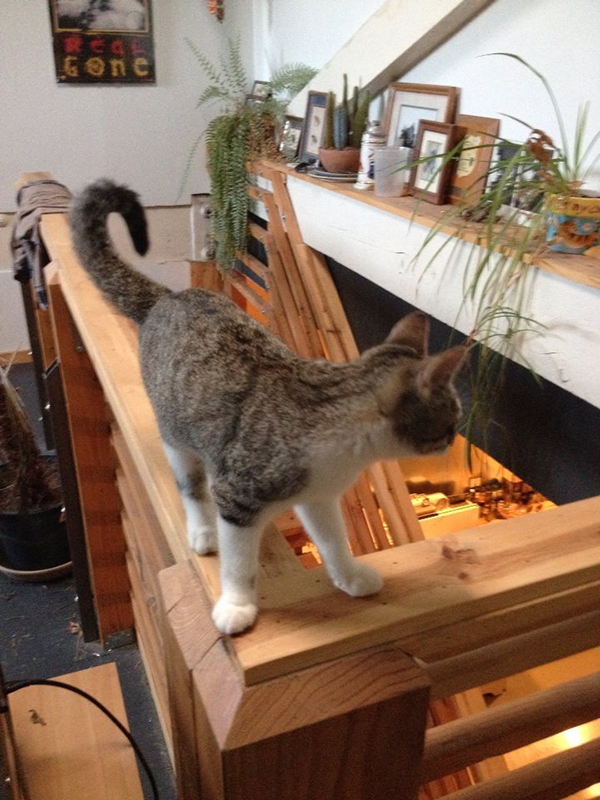 Noodles did not survive the fire. She was found under the clawfoot bathtub, where she was probably hiding and succumbed to the thick smoke. 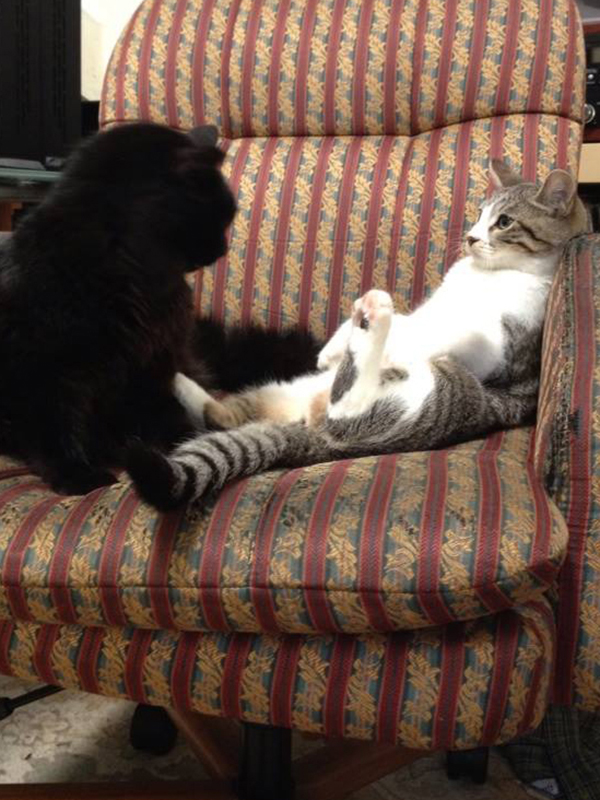 Freddy, while his health is seriously deteriorating now due to age, was fortunate enough to have survived the fire. Noodles the kitten did not. 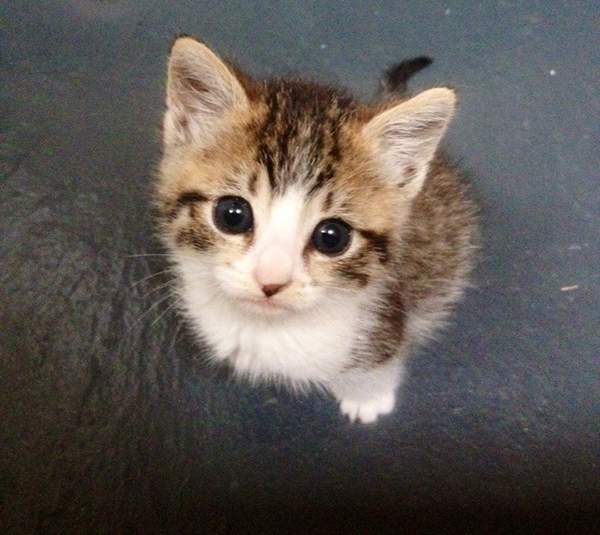 Noodles was found as a very, very tiny kitten in the street near the AK warehouse in June 2014. She was sick, seemingly stunted, her eyes closed by illness, and barely able to walk. She was carefully nursed back to health, pictured here last July, before becoming a fully grown happy and healthy cat. She is missed dearly.

https://www.indybay.org/newsitems/2015/03/...
Add Your Comments
Support Independent Media
We are 100% volunteer and depend on your participation to sustain our efforts!