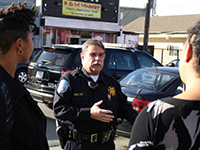 In the early afternoon of February 3, Yuvette Henderson, a 38-year-old African American mother of two was shot and killed by Emeryville police on Hollis Street just inside of Oakland city limits. An employee of Home Depot in Emeryville called police reporting a shoplifter who was armed with a gun. Initially, police did not claim Yuvette had brandished a weapon when they approached her, but later said she did. Emeryville police officers Michelle Shepherd and Warren Williams both fired multiple times at Yuvette, killing her instantly. As activists who inspected the scene of the shooting suspected, a high-powered AR-15 rifle was used to kill Yuvette.

Nearly a hundred people turned out for a vigil for Yuvette Henderson that evening, marching to Home Depot where a window was broken, then chanting inside of Safeway and blocking the intersection of 40th Street and San Pablo Avenue before returning to the site of a memorial for Yuvette.

On the morning of February 10, activists gathered at the site of the memorial for Yuvette and proceeded to deliver printed questions for ExtraSpace Storage, where Yuvette was gunned down, and Home Depot, where Yuvette was accused of shoplifting and apparently some sort of altercation took place. A demand was issued for both the Emeryville and Oakland police departments to release surveillance video.

Vigil for Yuvette Henderson, Gunned Down by Emeryville Police in Oakland |

Statement on the Emeryville Police Department's Killing of Yuvette Henderson |