Add an Event
Newswire
Calendar
Features
Home
Donate
From the Open-Publishing Calendar
From the Open-Publishing Newswire
Indybay Feature
Publish to Newswire
Add an Event
Related Categories: East Bay | Police State & Prisons | Racial Justice | Womyn
Vigil for Yuvette Henderson, Gunned Down by Emeryville Police in Oakland, 2/3/15: photos
by Dave Id
Wednesday Feb 4th, 2015 12:53 PM
Nearly a hundred people turned out for a vigil for Yuvette Henderson, a 38-year-old African American mother of two who was gunned down by Emeryville police on Hollis Street, just inside of Oakland city limits. A small memorial created shortly after her death grew with more candles and flowers as people began to arrive around 7:30pm for the vigil at 34th Street and Hollis. An hour later, perhaps two thirds of those gathered proceeded to march to the Home Depot and Pak N Save/Safeway in Emeryville before returning to the memorial. By that time, police had left the area and those remaining walked over to the ExtraSpace Storage facility where Yuvette was killed and inspected the scene of the shooting, finding bullet holes in a metal garage door and some blood and flesh left on the pavement. 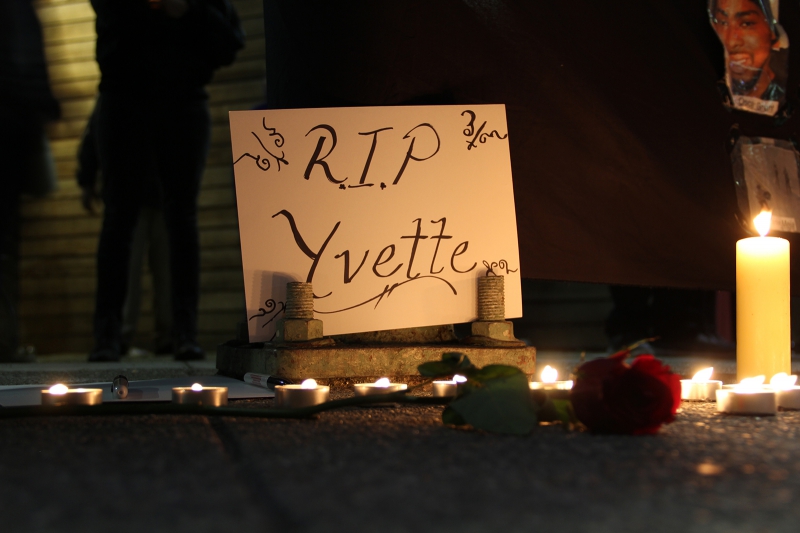 original image (1600x1067)
[“R.I.P. Yvette” sign at the memorial on the corner of 34th Street and Hollis. TRIGGER WARNING: Two final photos below depict flesh and blood remaining at the scene.]

The Anti-Police Terrorism Project (APTP) issued the call-out for the vigil to be held just hours after Yuvette was killed. The APTP recently initiated and helped organize the "Reclaim MLK" 96 hours of action in the Bay Area. Friends of Yuvette attended the vigil and said she carried a gun because she was in a domestic violence situation, but they couldn't imagine her pulling a gun outside.

<< FEB 4 UPDATE: Police are now accusing Yuvette of attempting to carjack three vehicles before they shot her down -- see details below photos. >>

The story of her death as told by police on the day Yuvette was killed is that at 12:35pm on February 3 someone called police to report a “combative” shoplifting suspect in Emeryville, then called police a second time to say the woman had a gun and had left the store. Police reportedly found the same woman a block away on the other side of Interstate 580 in Oakland and proceeded to gun her down. The police did not name the woman or her race, or the store involved in the incident, but they have said that two officers found the woman and shot her. Police have not specified whether both officers fired their weapons or said how many shots were fired, and they claimed not to know whether either of the officers were wearing video cameras. While police do say vaguely that a gun was supposedly found in the vicinity, they have not stated that Yuvette drew a gun or pointed it at officers. Most notably on the day of the shooting, police failed to offer any justification as to why Yuvette was executed. Normally, the post-shooting police script would require them to claim that Yuvette pointed a weapon at them, or appeared to have a gun in her hand, or that she was reaching for her waistband, etc.

One witness in a corporate media report described how Yuvette tried to wave down a passing bus: "The girl did not have no gun. She was waving her hands." Another witness named Russ Whitehead was almost killed by the hail of police fire that shattered his car windows with him inside, police only showing concern for his safety after they had killed Yuvette. That same witness reported five or six police officers shouting at Yuvette before she was gunned down.

Those present at the vigil were highly skeptical of the police version of events based on the regular lies so many police departments have told after shooting down African American men and women in the past. One point raised was that there is a video camera just above a garage door right next to the garage door that had the most bullet holes and markings, suggesting that the reason police have not claimed Yuvette pointed a gun at them is because they know she didn’t, and that the ExtraSpace Storage surveillance camera will bare that out if it was functioning and pointing in the right direction at the time.

The only clues to date about which specific officer or officers fired their weapons come from two witnesses to the immediate aftermath of the shooting. One witness at the vigil said that a female officer after the shooting was holding her hands to her face, seemingly shaken and aghast at what she had participated in. A report online shows a photograph of a female officer whose identity other officers were attempting to conceal as she left the scene.

After the vigil, upon inspecting the garage door showing the most bullet marks, it became apparent to those present that at least two weapons were fired at Yuvette, a shotgun and a handgun or rifle. (A witness at the vigil reported seeing an AR-15 or M15 held by police.) Numerous small holes and dimples in the door suggested they were the result of shotgun pellets. It appeared that two shotgun rounds had been fired based on separate groupings of the smaller markings. At least four or five notably larger holes were seen in the garage door #107 at ExtraSpace Storage. There were also similar small dimples in the door to the left and larger chips missing from the cinderblock walls surrounding the doors.

The Oakland fire department truck that backed into the garage alcove to hose down the scene of the killing did a haphazard job, leaving broken glass and grisly bits of blood and flesh in the garage alcove parking area and in the street gutter where the water from their “clean-up” flowed. It appeared that Emeryville police literally shot Yuvette to pieces. [WARNING: Final two photos below depict this.]

Separately, on the same afternoon, Contra Costa County sheriff’s deputies shot and killed an as yet unnamed man in Antioch and police in St. Louis, Missouri killed 23-year-old Ledarius D. Williams. The two Bay Area killings happened within minutes of each other. The killing in St. Louis is said to have happened at about 3:30pm CST.

At the vigil there were discussions about possible future demonstrations in and around Emeryville. 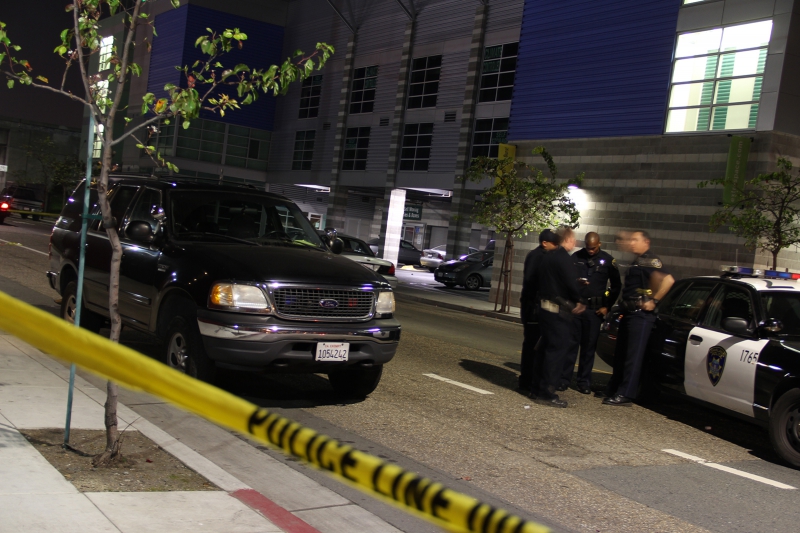 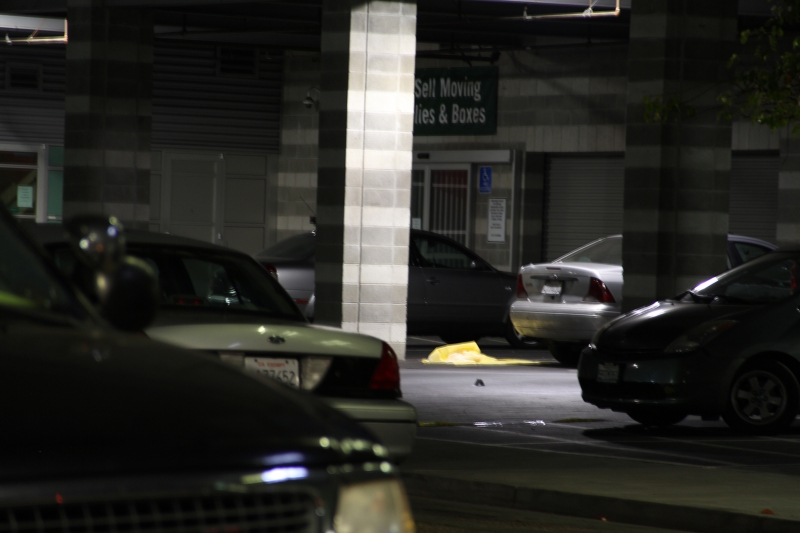 original image (1600x1067)
https://www.indybay.org/police/
§Those gathered for the vigil near candle and flower memorial at 34th Street and Hollis, groups of others in vicinity
by Dave Id Wednesday Feb 4th, 2015 12:53 PM 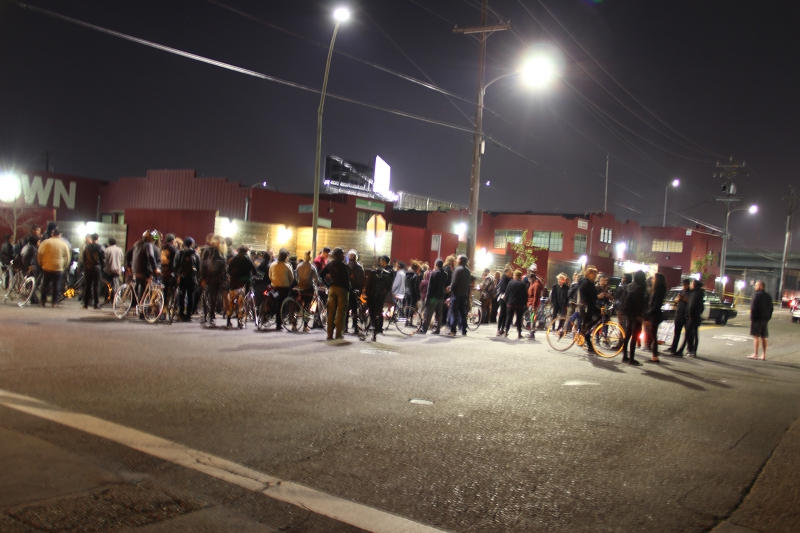 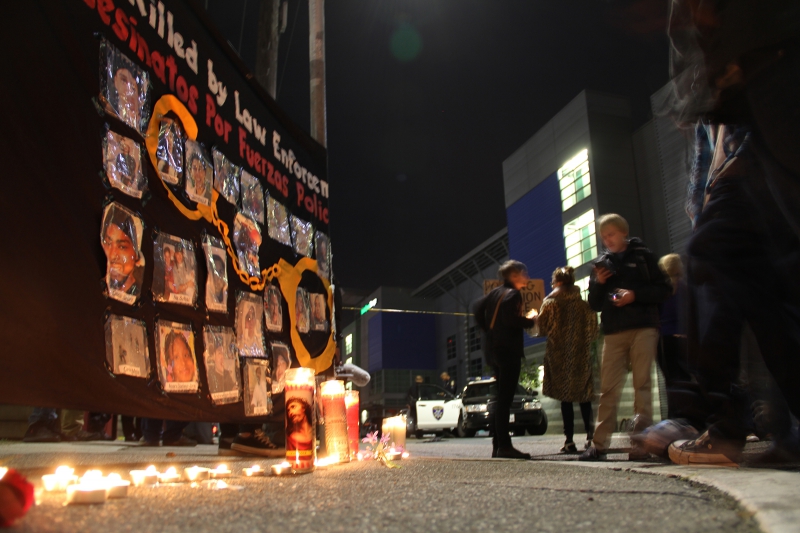 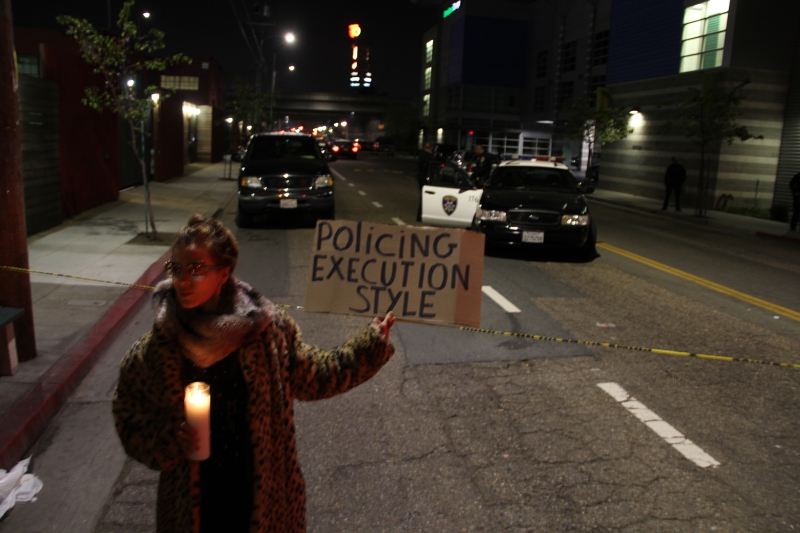 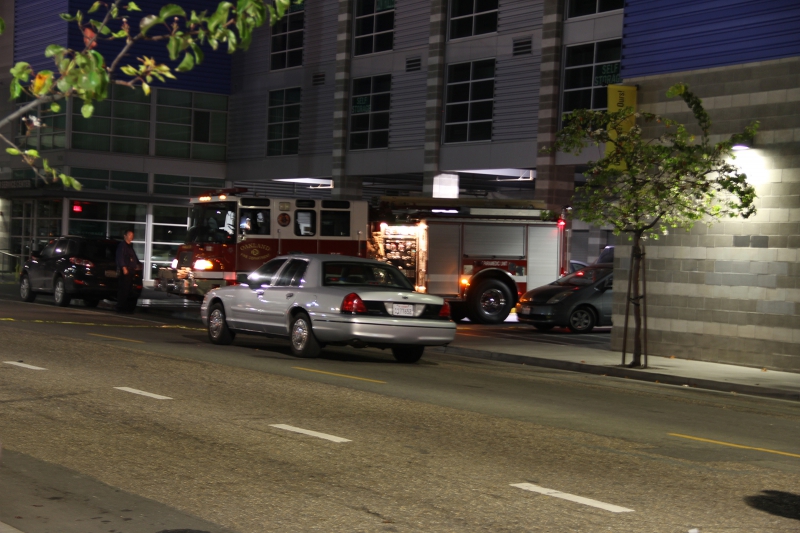 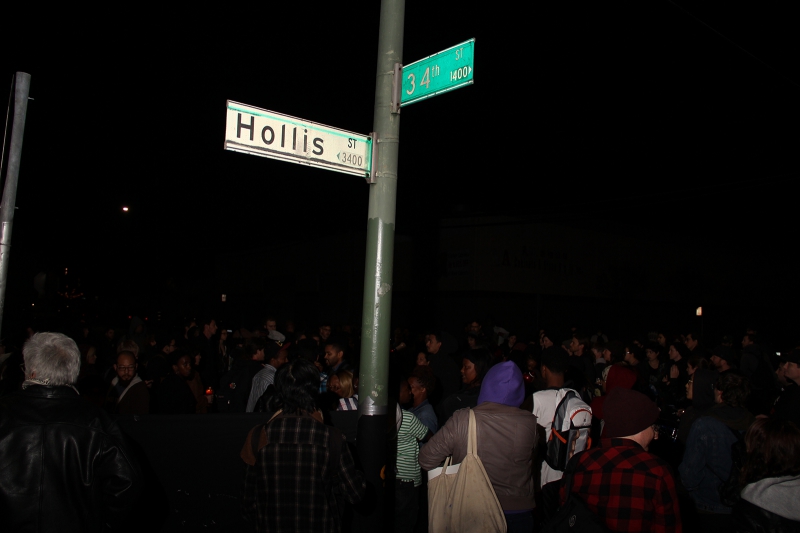 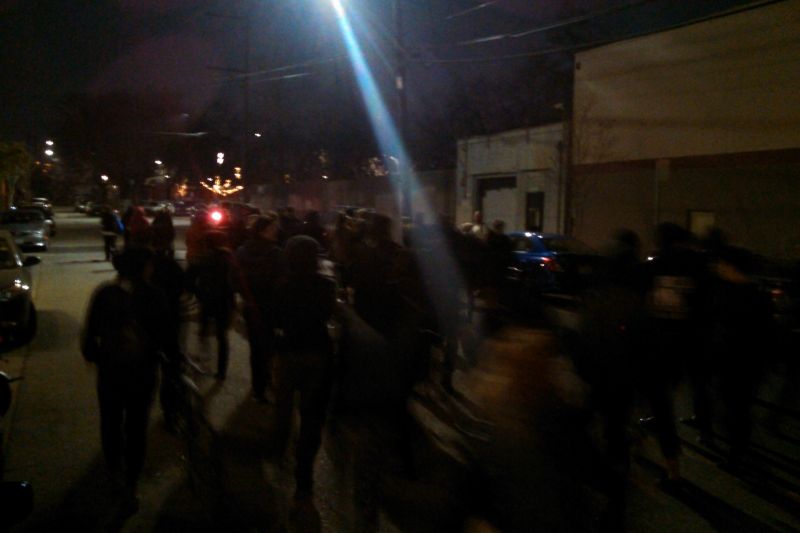 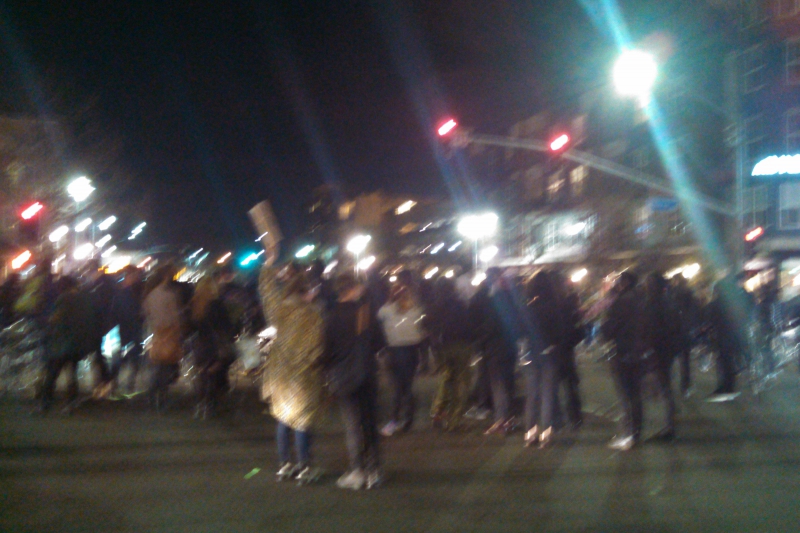 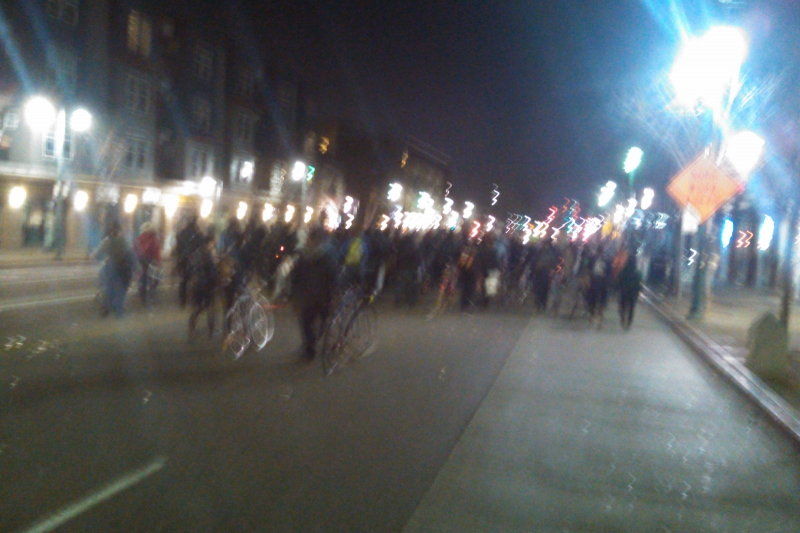 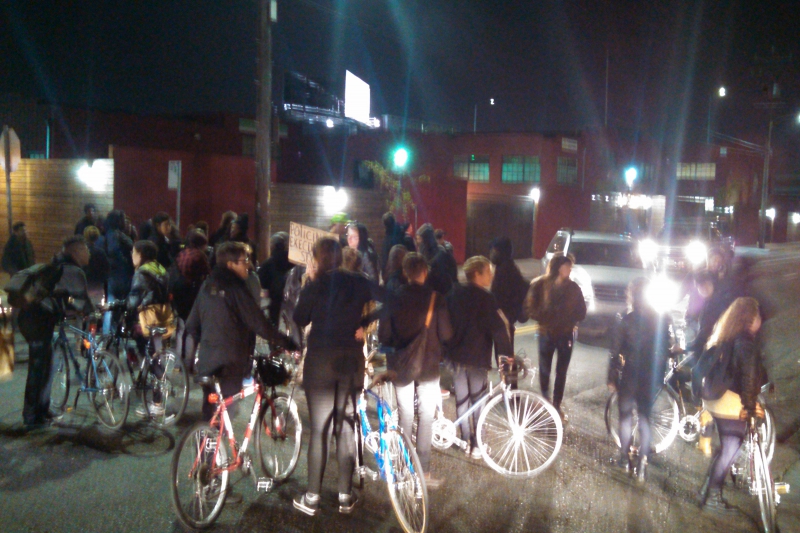 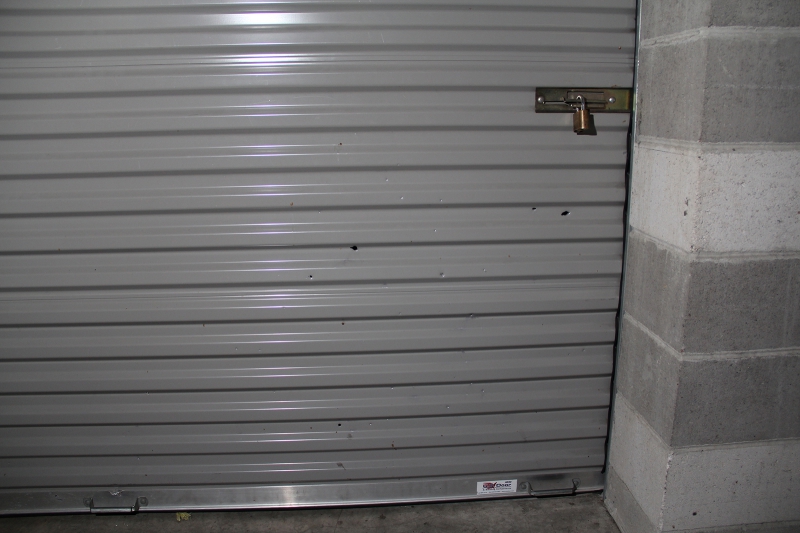 original image (1600x1067)
There were other holes and markings on this door, chips on nearby walls, and marks on the door to the left not shown here, but this is the primary grouping. 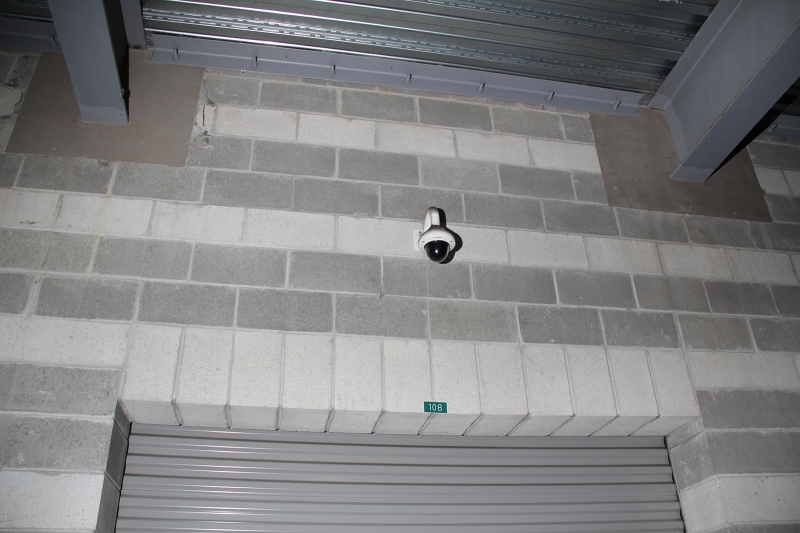 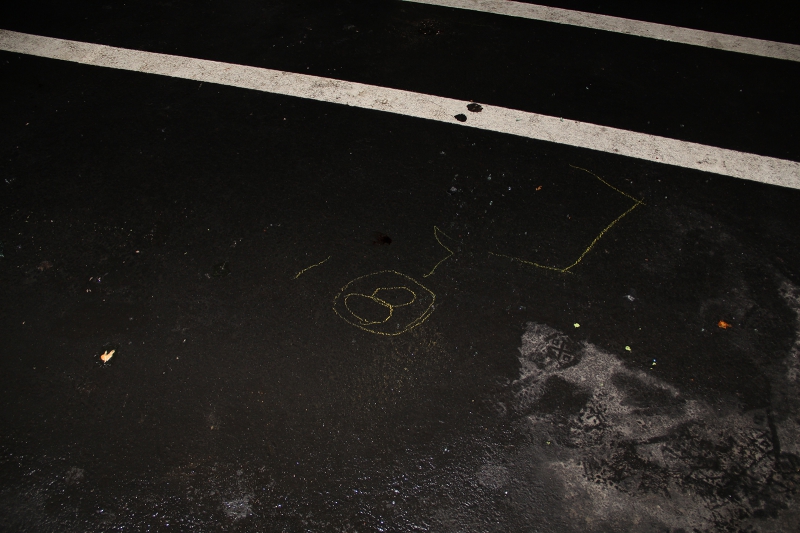 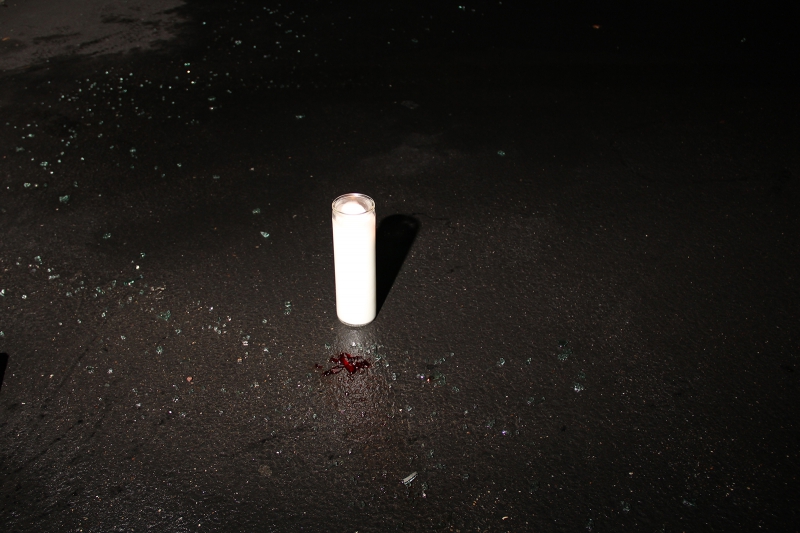 original image (1600x1067)
https://www.indybay.org/police/
§Updated narrative from Emeryville and Oakand police, 2/4/15
by Dave Id Wednesday Feb 4th, 2015 7:08 PM
In a press conference today at Emeryville police headquarters, police said they shot at Yuvette "at least" 12 times after she pointed a gun at them, according to corporate media reports. (The report was later updated to read "at least seven" shots.)

Police said one of the officers was indeed wearing a body camera but did not turn it on until after the killing.

Police also presented a new accusation against Yuvette, that she tried to carjack three cars. It's typical for police to build up a case against the people they kill after the fact. Happens all the time, probably almost every time. Sometimes it takes them a few days to really crank up the heat.

It's hard to figure how they can make such a declaration about multiple attempted carjackings, though, considering that the Home Depot is only a block from where Yuvette was gunned down.

At least one witness said Yuvette tried to wave down a bus but it didn't stop. Was that the first supposed carjacking?

The witness named Russ Whitehead who had his car windows shot out by police while he was inside the car said no such thing yesterday, only that he heard Yuvette yelling. In media interviews it sounded like he had a friend with him who had another car. Were those the second and third supposed carjackings?

Today, in a new interview published in another corporate outlet, Whitehead, who has been interviewed repeatedly by other outlets and didn't mentioned it before, says Yuvette pointed a gun at his partner before police killed her.

But Whitehead also said that as he returned to pick up his car from the storage facility, he was confronted by protesters, some of whom yelled threats and profanity at him and would not allow him to move his car. Others who witnessed Whitehead near the vigil say that is completely made up, not even close to true. Apparently, Whitehead approached the vigil and taunted people, saying that Yuvette was a thief and police did their job.

If Whitehead is lying about protesters not letting him move his car, what else is he lying about?