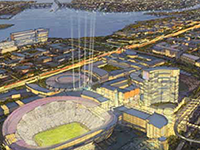 EastWest writes: Just so you don’t get it twisted, we want to let you know the facts about the new Colosseum Area Specific Plan. It is being financed with money from HayaH Holdings in Dubai and Colony Capital LLC in Los Angeles. Both of these groups tried unsuccessfully to buy out the Anschutz Entertainment Group, owners of the entertainment complex around the LA Staples Center. Now, these groups are able to bring that same vision to Oakland. With help from Mayor Quan and the other good old boys, this development promises to completely transform East Oakland and start a process of gentrification worse than anything seen in West Oakland. They wish to call their new development Colosseum City.

Rashid al Malik, the CEO of HayaH Holding, summed up the vision of this project very simply for the press. He told them: “We share the city of Oakland’s and Mayor Quan’s long-stated vision to transform the Coliseum site and create a larger district surrounding it with a new economic base.” This is what they mean to do, in their own words. And based on the existing plan diagrams, it appears that this new economic base will be created out of tech company offices and their corresponding luxury housing. Just as it has happened in Silicon Valley, Seattle, and San Francisco, this entire area will become the exclusive domain of an imported tech-worker population. A minority of the housing in this new district will be low income, and any improvement of the nearby transit hubs will be for the new residents.

Because most of this land is on the western side of the 880 freeway, it is sealed off from the rest of the Deep East by the Colosseum parking lot and the warehouses surrounding Walmart. The BART station will be the center of activity for most of the new housing, but an exclusive minority of this housing will be built along the Lion Creek estuary. With its grand views of the bay, this luxury housing will cater to millionaires and the super-rich.