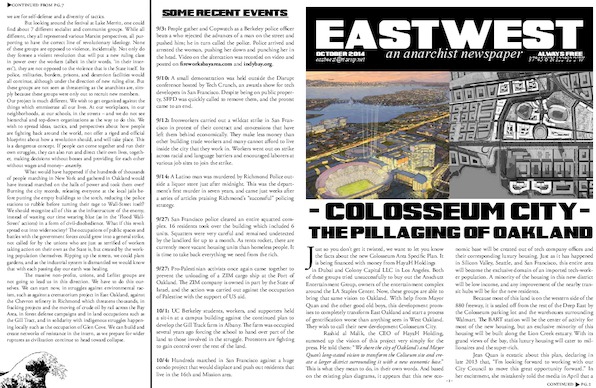 Download PDF (1.3MB)
EastWest #5 weaves together the story of how the hyper-gentrification of Oakland through the redevelopment of the Oakland Athletics stadium is connected with the FBI Bombing of Earth First! and Industrial Workers of the World (IWW) organizer, Judi Bari. Other articles take stabs at recent lows in building development ideas, action news roundups, and a critique of the recent climate rally in Oakland.
§colosseum city: the pillaging of oakland
by EASTWEST Tuesday Oct 21st, 2014 5:39 AM 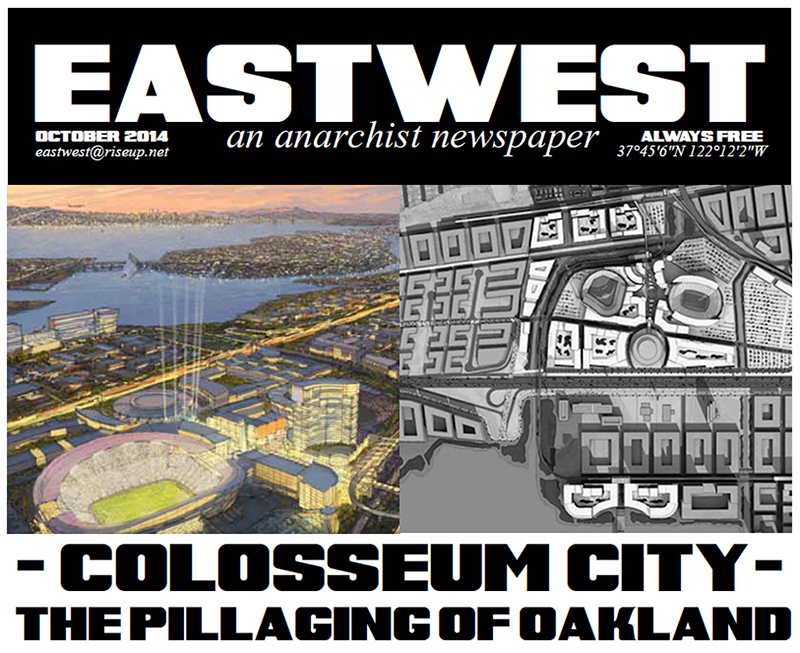 Just so you don’t get it twisted, we want to let you know the facts about the new Colosseum Area Specific Plan. It is being financed with money from HayaH Holdings in Dubai and Colony Capital LLC in Los Angeles. Both of these groups tried unsuccessfully to buy out the Anschutz Entertainment Group, owners of the entertainment complex around the LA Staples Center. Now, these groups are able to bring that same vision to Oakland. With help from Mayor Quan and the other good old boys, this development promises to completely transform East Oakland and start a process of gentrification worse than anything seen in West Oakland. They wish to call their new development Colosseum City.

Rashid al Malik, the CEO of HayaH Holding, summed up the vision of this project very simply for the press. He told them: “ We share the city of Oakland’s and Mayor Quan’s long-stated vision to transform the Coliseum site and create a larger district surrounding it with a new economic base .” This is what they mean to do, in their own words. And based on the existing plan diagrams, it appears that this new economic base will be created out of tech company offices and their corresponding luxury housing. Just as it has happened in Silicon Valley, Seattle, and San Francisco, this entire area will become the exclusive domain of an imported tech-worker population. A minority of the housing in this new district will be low income, and any improvement of the nearby transit hubs will be for the new residents.

Because most of this land is on the western side of the 880 freeway, it is sealed off from the rest of the Deep East by the Colosseum parking lot and the warehouses surrounding Walmart. The BART station will be the center of activity for most of the new housing, but an exclusive minority of this housing will be built along the Lion Creek estuary. With its grand views of the bay, this luxury housing will cater to millionaires and the super-rich.

Jean Quan is ecstatic about this plan, declaring in late 2013 that, “I’m looking forward to working with our City Council to move this great opportunity forward.” In her excitement, she mistakenly told the media in April that a crown-prince of Dubai was also involved in creating Colosseum City. As to why she did this, we are uncertain, but as with all Oakland politics, no one knows what the fuck is going on until everything is over and done with. After being informed that she was in error, Jean Quan shrugged her shoulders and kept on trucking with her mayoral campaign.

Fearing that she will be ejected from the halls of power this coming election, Quan is doing what every aging tyrant does: build temples that will outlast her. Quan has been instrumental in approving the Brooklyn Basin development near Jack London. Along with the Beijing based Zarison Holdings, Quan recently oversaw the groundbreaking of the 3,100 unit housing project. 70% of the units will be above market-rate, with the rest below-market rate. In other words, the new project will be unaffordable to the majority of current Oakland residents. The Brooklyn Basin will extend the waterfront gentrification of Emeryville, West Oakland, and Jack London all the way to 9th Avenue in East Oakland. The Brooklyn Basin and Colosseum City are set to be completed around the same time in 2017- 2018. It is clear from all of these master plans that the gentrification will start at the water and spread inland, like most military invasions.

In the middle of all this are the owners of the A’s and the Raiders. The City of Oakland has been negotiating with these good old boys in order to secure the commitment pf the teams to the city. For example, the owners of the A’s strung along the city for many months, always maintaining their threat of privately developing the stadium themselves. In order to prevent this from happening, Jean Quan is offering to magically come up with tens of millions of dollars to keep the teams here.

A cursory look at who some of these team owners are is quite revealing. The Oakland Athletics are owned by Lew Wolff and John Fisher. Wolff owns the San Jose Earthquakes and is responsible for much of the development in downtown San Jose. John Fisher is heir to The Gap fortune and part of the group that controls the Humboldt Redwood and Mendocino Redwood companies ( see Redwood Summer article on Page 4) . Incidentally, these lumber companies supply construction material for all manner of development in Oakland. These team owners have vast fortunes that are never big enough, it seems. None of them care about Oakland or the poor people living just a few dozen blocks away. All of this development will only make these team owners even more wealthy, sink the City of Oakland further into debt, and perpetuate the spectacular narcosis of stadium sports.

It is only a matter of time before the plans are locked in. Should anyone wish to comment on, interrupt, or generally sabotage the public forums where these developers and politicians will spin their lies, there are only few opportunities left. On October 9th, from 6:30 to 8:30 , there will be a public meeting at the 81st Avenue Library. The public comment period for the Colosseum City plans end on October 17th. After that, the plans will only move forward. It is still possible that the entire plan will fall apart, given that this is Oakland, but if it does not, it will be up to us to stop them.
Add Your Comments
LATEST COMMENTS ABOUT THIS ARTICLE
Listed below are the latest comments about this post.
These comments are submitted anonymously by website visitors.