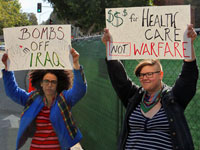 In response to the recent threat of U.S. military attacks in Iraq, community members in Santa Cruz held a vigil for the Iraqi people on June 23 at the Town Clock. Those who participated in the vigil are calling for nonviolent diplomacy, reparation and repairs, no military intervention in Iraq, and an end to weapons sales in the Middle East. "We are sick and tired of violence being thought of as a way to prevent violence," a UCSC student said at the vigil.

The student was one of a number of UC Santa Cruz students present at the vigil who were protesting the connection between the University of California system and war profiteering. "At UCSC we are supposed to be a very diverse, engaged, and active community, but being up there I realize that most students don't realize we are this involved," she said. "The UC system invests in bomb labs and is profiteering from going to war. The UC is getting money this way, and that's not OK."

Other supporters at the vigil included individuals from the Faith communities of Santa Cruz, WILPF SC, the Palestine-Israel Action Committee of the Resource Center for Nonviolence, and Jewish Voice for Peace SC. Organizers say they will be holding similar vigils at the Town Clock in support of the people of Iraq in the near future.