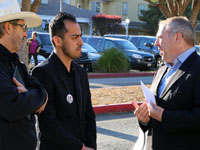 On June 18, Tony Serrano stood before the Half Moon Bay City Council to demand justice for his sister, Yanira Serrano Garcia. Yanira was killed by San Mateo County Sheriff's deputy Menh Trieu on June 3 when she was having a health crisis outside of her home at the Moonridge housing complex. The Serrano family and their supporters are asking the Half Moon Bay City Council to support a number of resolutions, including one that calls for a transparent criminal investigation into the killing of the 18-year-old.

The family is also asking that June 3 be named "Yanira Serrano Garcia's Memorial Day" by official proclamation in Half Moon Bay, and that the council call for the establishment of a sub-committee to study the lack of social services devoted to Moonridge. Yanira's brother asked for those in the audience who support the resolutions to stand, and the majority of those in the public seating area quickly stood. "It is really overwhelming what is happening to the family," he said.

After the killing of Yanira there has been a number of vigils and demonstrations held in Half Moon Bay demanding justice. At the city council meeting, the Mayor of Half Moon Bay announced that on Thursday, June 26 there will be a community meeting at 6pm at the IDES Hall in Half Moon Bay to "further discuss the issues," he said.

Public Meeting to Discuss the Killing of Yanira Serrano Garcia