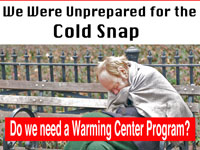 The recent sub-freezing weather has prompted community members to mobilize around the creation of “warming stations”. Warming centers for the homeless in the City of Santa Cruz and across the county could open during the overnight hours when temperatures drop drastically.

Steve Pleich writes: "Many have suggested that the Kaiser Permanente Arena and the newly renovated and reopened Vets Hall would be ideal locations for these centers. This is more than a 'modest proposal'. This is a challenge to our humanity and compassion at a time when these qualities of mercy seem to be not only strained but in short supply."

Update: Santa Cruz Sanctuary Camp hosted a conversation and community planning session for a Warming Center Program on December 15. An ad hoc group calling themselves Residents for a Coldest Nights Warming Center was formed, and they held a meeting to continue the discussion on December 22.

Community Should Get Behind Creation of Warming Stations |