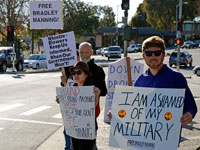 Coinciding with demonstrations planned worldwide for February 23, Bradley Manning's 1000th day in prison, community members in Santa Cruz gathered at the Town Clock on February 24 to demand justice and humane treatment for the U.S. "whistleblower" soldier.

At the Town Clock, a number of community members held signs that described Bradley Manning as a "hero" and one sign described what he has endured in prison and solitary confinement as "torture." The overwhelming sentiment of the Santa Cruz group was that Manning is a whistleblower and that the role he played exposing the military's crimes was crucial to the functioning of U.S. democracy, as well as a legally permissible activity.

Demonstrators ask, "What about the War Crimes?" at Free Bradley Manning Protest |