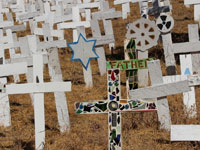 Crosses in Lafayette: The Need to Remember
Memorial for Soldiers Killed in Iraq and Afghanistan Continues to Grow

On a small hill next to Deer Hill Road in the City of Lafayette, over 6,000 crosses have been erected and displayed as an on-going tribute, and to memorialize the soldiers, who have been killed in Iraq or Afghanistan. The hillside has been marked with controversy, and has sparked anger and even attracted counter protests to its existence.

The hillside was once owned by a woman named Louise Clark. Her husband was a WWII veteran, and though both have passed away, volunteers tirelessly continue to maintain the site. Jeff Heaton is the man who started the installation that continues to grow.