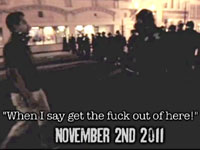 Copwatcher reports: Oakland Police claim that they have retrained all their officers in crowd control tactics for the upcoming May 1st general strike. While much is unclear about what will be different, there are things that are sure to be the same. Officers that make up most of Oakland's Police Shootings will continue to be deployed as Tango and QRF (Quick Response Force). OPD Chief Howard Jordan has suggested that he may send specialized units into the crowd for the purpose of making surgical arrests, rather than use lethal force through the deployment of chemical and less than lethal rounds indiscriminately. However, sending teams of Officers that are known for their relationship to violence into large crowds of people is a clear indication that OPD intends to incite panic and chaos rather than develop better methods for interfacing with large groups of people.