Today, the American Civil Liberties Union of Northern California (ACLU-NC) and the San Francisco Bay Area Chapter of the National Lawyers Guild (NLG) demanded that the Oakland Police Department (OPD) explain if it plans to abandon its Crowd Control Policy, in favor of vague standards that fail to provide specific guidance to officers in the field and that invite a repetition of last fall’s botched handling of Occupy protests. OPD’s Crowd Control Policy provides essential guidance that aims to ensure demonstrators’ rights.

The statement is troubling because it is unclear whether OPD intends to abandon its existing Crowd Control Policy in favor of POST guidelines. POST, or the Commission on Peace Officer Standards and Training, has adopted guidelines for crowd management that contain only very vague and general standards, which fail to provide officers in the field with clear guidance or to prohibit any specific, dangerous tactics which OPD has a history of using.

“Even with clear directives in place last fall, OPD dramatically mishandled its response to the Occupy protests,” said ACLU-NC staff attorney Linda Lye. “If OPD eliminates important prohibitions against specific tactics from its Policy and replaces them with vague standards, it will invite a repetition or worse, rather than prevent a recurrence, of what happened last fall.”
“OPD and the Oakland City Attorney have repeatedly acknowledged that OPD is bound by the court approved Crowd Control Policy. It's unclear why the police seem to think they can abandon it now, unless they are simply trying to deflect attention from the fact that OPD’s response to Occupy has violated nearly every aspect of its own Policy,” said NLG lawyer Rachel Lederman, counsel on the prior and current lawsuits against OPD.

Protest activity is planned for May 1, 2012. The ACLU-NC and NLG have therefore demanded that OPD immediately explain whether it continues to adhere to the Crowd Control Policy or if has instead abandoned them for the more vague POST guidelines, in violation of the federal court order.

On October 25 and November 2-3, 2012, OPD and assisting agencies responded to two Occupy Oakland protests by blanketing crowds of peaceful protesters with flash bang grenades, lead-filled shotbags, “pepperballs,” and tear gas, resulting in widespread injuries. OPD’s response to these protests, the subject of a pending lawsuit brought by the ACLU-NC and NLG, systematically violated its own Crowd Control Policy, which articulates important crowd management principles – such as reliance on the minimal use of force – and contains key, common sense directives for officers in the field that protect protester safety – such as prohibiting officers from throwing flash bang grenades or other exploding projectiles directly at people, or shooting less lethal munitions directly into crowds. The Crowd Control Policy was the product of a federal court settlement agreement of a prior lawsuit brought by the ACLU and NLG, arising out of OPD’s handling of a peaceful anti-war protest at the Port of Oakland in 2003. 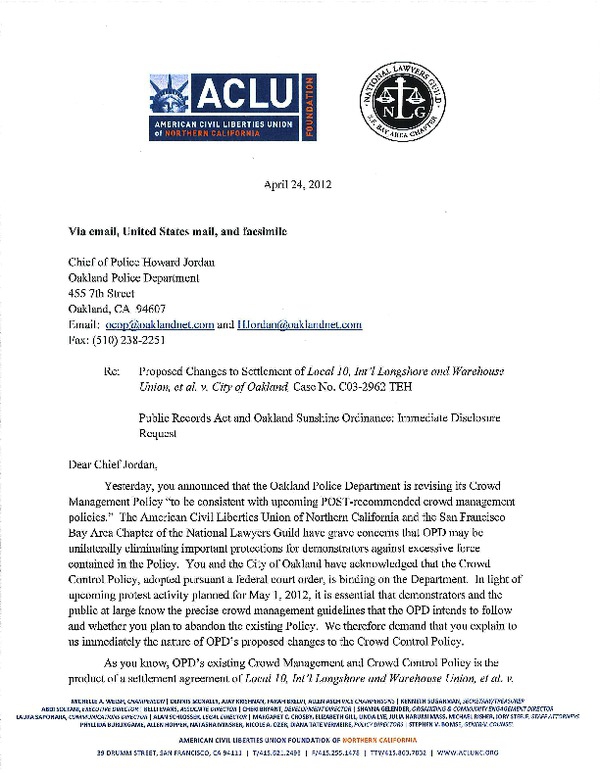 Yesterday, you announced that the Oakland Police Department is revising its Crowd
Management Policy "to be consistent with upcoming POST-recommended crowd management
policies." The American Civil Liberties Union of Northern California and the San Francisco
Bay Area Chapter of the National Lawyers Guild have grave concerns that OPD may be
unilaterally eliminating important protections for demonstrators against excessive force
contained in the Policy. You and the City of Oakland have acknowledged that the Crowd
Control Policy, adopted pursuant a federal court order, is binding on the Department. In light of
upcoming protest activity planned for May 1,2012, it is essential that demonstrators and the
public at large know the precise crowd management guidelines that the OPD intends to follow
and whether you plan to abandon the existing Policy. We therefore demand that you explain to
us immediately the nature of OPD's proposed changes to the Crowd Control Policy.

As you know, OPD's existing Crowd Management and Crowd Control Policy is the
product of a settlement agreement of Local 10, Int'l Longshore and Warehouse Union, et al. v.
City of Oakland, Case No. C03-2962 TEH, a case brought by the ACLU and NLG challenging
OPD's response to a peaceful anti-war protest at the Port of Oakland in 2003. The policy
articulates important crowd management principles - such as reliance on the minimal use of
force - and contains key directives for officers in the field that protect protester safety - such as
prohibiting officers from throwing flash bang grenades or other exploding projectiles directly at
people, or shooting less lethal munitions directly into crowds.

The guidelines created by the Commission of Peace Officer Standards and Training, by
contrast, merely identify criteria to be considered in formulating crowd management policies and
fail to contain specific directives. The POST Guidelines on Use of Force contain very general
standards (e.g ., "the force used must be objectively reasonable under the totality of the
circumstances," Page 39) that, while a legally accurate statement of the Fourth Amendment law,
fail to provide officers in the field with clear guidance.

Moreover, the March, 2012 , POST Guidelines on Crowd Management, Intervention and
Control appear to permit the use of so-called "less lethal" munitions to disperse crowds, whereas
the OPD Crowd Management and Crowd Control Policy specifically prohibits the police from
shooting such munitions into crowds as a means of crowd dispersal.

There are good reasons for the specific prohibitions in the existing Crowd Control Policy.
All so-called "less lethal" munitions are potentially deadly, as we have seen from the tragic death
of college student Victoria Snelgrove when Boston police opened fire at an unruly crowd with
pepperballs in 2004, and the near-fatal injury to veteran Scott Olsen when Oakland police
opened fire on the crowd with shot filled "bean bags" on October 25,2011.

The problem with OPD's handling of the Occupy protests last fall, on October 25 and
November 2-3, 2012, was not the department's Crowd Control Policy. The problem was that
OPD failed to adhere to its own Crowd Control Policy. Even with a strong Policy in place, the
department last fall responded to these protests by engaging in highly dangerous and clearly
unconstitutional practices that violate the Policy. These practices, extensively documented by
the ACLU and NLG, included, for example, shooting less lethal munitions and throwing
explosive devices directly into crowds. We are extremely concerned that if the department
eliminates important prohibitions against these and other unsafe tactics from its Policy and
replaces them with vague standards, it will invite a repetition - rather than prevent a recurrence of
what happened last fall.

In court pleadings, you and the City of Oakland have acknowledged you are bound by the
OPD Crowd Management and Crowd Control Policy: "Defendants admit that the crowd-control
policy that Oakland adopted as part of the settlement in two previous consolidated cases before
this COUl1 remains in effect and the settlement obliges Oakland to follow it." See Camp bell v.
City ofOakland, Case No. C11-05498 RS, Answer, Doc. 47. Further, the Local 10 settlement
agreement requires you to meet and confer with us regarding "any material change to the term of
[the Crowd Management and Crowd Control] Policy." Local 10 Stipulation & Order (entered
December 24,2004), page 6, line 5-6.

We therefore fail to understand why you now believe that OPD is free to alter or abandon
that Policy without running afoul of the federal court order that adopted it, and to do so without
even consulting with us beforehand. Please clarify whether OPD intends to continue to adhere to
the Crowd Control Policy. Please also explain to us the nature of any proposed revision s to the
Policy and to OPD crowd control training and provide us with any and all revisions you are
considering to the Policy or training materials.

The request for this information and documents is also made pursuant to the Public
Records Act and constitutes an immediate disclosure request pursuant to the Oakland Sunshine
Ordinance, which require, respectively, a response within ten and three days. See Cal. Gov.
Code §6250 et seq., and Oakland Municipal Code Sec. 2.20.230. Because, however, the May 1
protests are rapidly approaching, we request a response immediately. 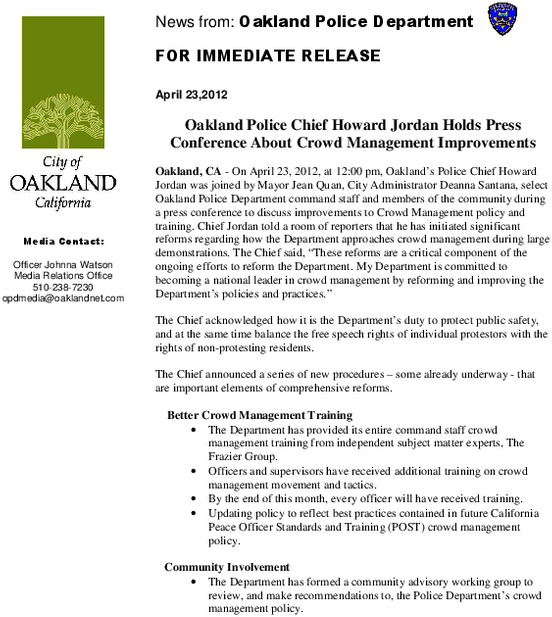 News from: City of Oakland

Oakland, CA — The Oakland Police Department is committed to becoming a national
leader in crowd management by reforming and improving its policies and practices.
Today Chief Jordan, Mayor Jean Quan and City Administrator Deanna J. Santana
announced a series of new procedures – some already underway – that OPD is adopting
to reform its approach to crowd management.

“It is our duty to protect public safety and at the same time balance the free speech
rights of individual protestors with the rights of non-protesting residents,” said Police
Chief Howard Jordan. “Since October 25, the Police Department has handled numerous
Occupy Oakland events involving more than 60,000 people. Most events have gone
without incident, but in the few individual cases of alleged and known police
misconduct, I have acted quickly to investigate and hold officers accountable.”

Additionally, last December the City of Oakland hired an outside investigator to look at
the Department’s response to Occupy, and the Federal Monitor is conducting a separate
review.

“Even before the final results of these external reviews are complete, we recognize that
there is room for improvement,” Chief Jordan continued. “We are committed to
immediately improving our training, tactics, and policies in light of our experiences.”

City Administrator Deanna J. Santana commended the Chief for initiating efforts to
reform the Police Department: “As I have said before, I am committed to leading an
organization that acknowledges when we do things right, and that equally
acknowledges the areas that require improvement or corrective action.”

“We are building a new police department with stronger ties to the community, so I
thank Chief Jordan and City Administrator Santana for implementing new training,
management practices and policy reforms week after week as we learn from our
experiences,” said Mayor Jean Quan. “They have not waited for outside reports; our
interactions with demonstrators and the community have already changed. This
commitment to accountability is critical to build the trust necessary for real community
policing.”

The new crowd management procedures announced today – some of which are already
underway – fall into five key categories:

• Community Involvement. Chief Jordan has formed a community advisory
working group to review the Police Department’s crowd management policy and
make recommendations on how to improve it.

• Use of Force Investigations. The Police Department has modified its use of force
investigation strategy to make it more efficient and comprehensive. This includes
assigning additional investigators to assess use of force incidents, improving the
collection and review of evidence, and uses of force reports.

• Use of Mutual Aid. The Police Department will be participating in tabletop
exercises with outside agencies, has improved how it tracks their movement and
uses of force, and met with them to discuss OPD’s crowd management policies. 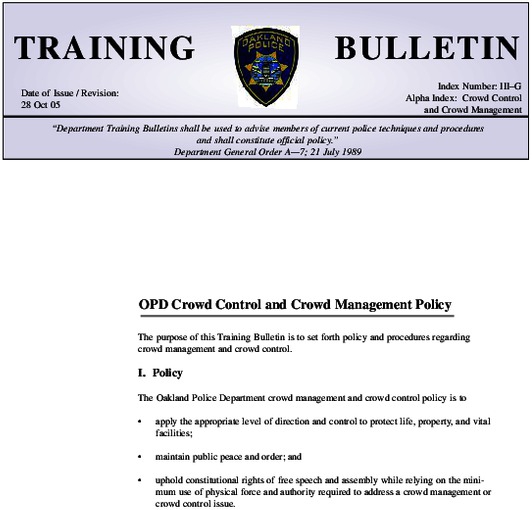 The purpose of this Training Bulletin is to set forth policy and procedures regarding
crowd management and crowd control.

• apply the appropriate level of direction and control to protect life, property, and vital
facilities;

• maintain public peace and order; and

• uphold constitutional rights of free speech and assembly while relying on the minimum
use of physical force and authority required to address a crowd management or
crowd control issue.

http://www.aclunc.org/news/press_releases/...
Add Your Comments
Support Independent Media
We are 100% volunteer and depend on your participation to sustain our efforts!