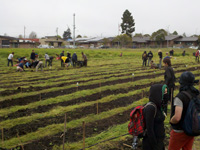 (Albany, Calif.), April 22, 2012 – Occupy the Farm, a coalition of local residents, farmers, students, researchers, and activists are planting over 15,000 seedlings at the Gill Tract, the last remaining 10 acres of Class I agricultural soil in the urbanized East Bay area. The Gill Tract is public land administered by the University of California, which plans to sell it to private developers.

For decades the UC has thwarted attempts by community members to transform the site for urban sustainable agriculture and hands-on education. With deliberate disregard for public interest, the University administrators plan to pave over this prime agricultural soil for commercial retail space, a Whole Foods Market, and a parking lot.

"For ten years people in Albany have tried to turn the Gill Tract into an Urban Farm and a more open space for the community. The people in the Bay Area deserve to use this treasure of land for an urban farm to help secure the future of our children," explains Jackie Hermes-Fletcher, an Albany resident and public school teacher for 38 years.