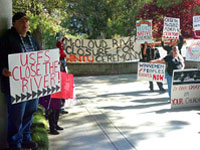 Members of the Winnemem Wintu Tribe from northern California on Monday, April 16 challenged Randy Moore, U.S. Forest Service Regional Forester, at his Vallejo office to protect indigenous women from racial slurs and physical harm during coming of age ceremonies planned for this June. Although claiming to be unfamiliar with the issue, Moore promised to review the Winnemem's request to close 400 yards of the McCloud River arm of Shasta Reservoir for 4 days so that the Tribe can conduct the ceremony. Moore committed to respond to the Tribe's request by May 1, 2012. While closing the river will mean a lot to the Tribe, it will have no impact on the Forest Service, said Caleen Sisk, Winnemem Chief and Spiritual Leader.

During a Coming of Age Ceremony in 2006, a woman “flashed” the ceremonial participants with naked breasts and yelled racist insults. “If someone did this during Mass, they would be arrested,” Chief Sisk said. “Like many traditional people, we hold our women in high regard," said Sisk. "This beautiful ceremony is vital to our girls' transitioning to womanhood with confidence, grace and knowledge. We must hold this ceremony for our tribe to survive."