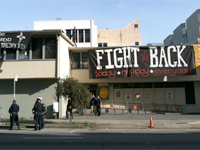 On Sunday, April 1st, Occupy SF working groups and affinity groups occupied a vacant building at 888 Turk Street in solidarity with the Western Regional Advocacy Project’s “We Won’t Get Fooled Again” National Day of Action for the rights of the un-housed, The idea was to liberate a vacant building and convert it into a social center, shelter and food bank for the people. Before reclaiming the building, organizers wrote, "We are taking this action to bring immediate relief and housing to homeless youth in our community, and to provide a space for assembling, sharing food and healing for all people."

The building at 888 Turk street has been vacant for five years and is owned by the Archdiocese of San Francisco. The SF Commune stated that they initiated the occupation "to provide a perpetual, autonomous headquarters for the Occupy SF movement. The building has space for food preparation and distribution, bedrooms for housing, event rooms for General Assemblies and art projects, classrooms and space for medical services." The electricity was on, but there was no running water. When San Francisco police raided the building on April 2nd, over 50 people were arrested.