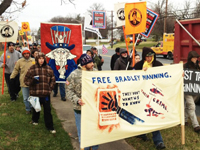 Eighteen months after he was first detained on accusations of revealing information to WikiLeaks, PFC Bradley Manning appeared before an Article 32 investigating officer for a pre-trial hearing on December 16th at Fort Meade in Maryland. Supporters began gathering outside the gates of Fort Meade to call for Manning's freedom and denounce the proceedings as unjust. Inside the tightly-controlled military court room, lead defense counsel David Coombs challenged the investigating officer, Army Lt. Col. Paul Almanza, to recuse himself due to conflicts of interest.

"Military officials have begun conducting their star chamber prosecution after abusing Bradley Manning of his rights for eighteen months," said Jeff Paterson, an organizer with the Bradley Manning Support Network, who was speaking from the vigil at Fort Meade. "The investigating officer is not only biased to produce an outcome that is favorable to his employer at the Justice Department -- he's under pressure from his Commander-in-Chief, who has already inappropriately weighed-in on this case."

Supporters have long argued that PFC Manning could not receive a fair hearing due to unlawful command influence from President Obama, who publicly declared in April that the former Army intelligence analyst "broke the law."

A bus carrying over 50 supporters from Occupy Wall Street arrived shortly after 9:00 AM as the media blackout began inside the courtroom. Former Army linguist Lt. Dan Choi, who was a prominent activist in the effort to repeal "Don't Ask, Don't Tell," greeted the new arrivals and spoke out in support of Manning.