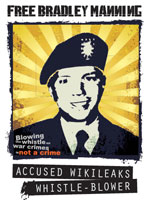 On November 21st, the United States Army scheduled an Article 32 pretrial hearing for PFC Bradley Manning, the Army intelligence specialist accused of releasing classified material to WikiLeaks. The pretrial hearing will commence on December 16th at Fort Meade, Maryland. This will be PFC Manning’s first appearance before a court and the first time he will face his accusers after 560 days (17 months) of pretrial confinement, including 250 days spent in solitary conditions. A rally and march in solidarity with Bradley Manning takes place on Tuesday, November 22nd, starting at 5pm at Market & Powell Streets in San Francisco.

Bradley Manning, a 23-year-old, openly gay, US Army intelligence analyst is facing life in prison. He is accused of sharing the following with WikiLeaks: a video of the killing of civilians by a US helicopter in Iraq, the Guantanamo Files, the Afghan War Diary, the Iraq War Logs and revealing US diplomatic cables. In short, he's been charged with telling the truth about controversial wars, foreign policies and corporate and government corruption and tyranny.