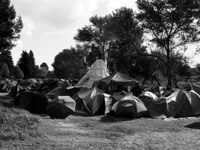 Occupy Santa Cruz has been working to address the needs of those abandoned by corporate medical care. In the face of rocketing health care costs, declining county health services, and now exaggerated heath concerns by city officials, members of the local Occupy Movement have been providing basic health services, including first aid, regular meals, and 24 hour sanitation facilities. To address emergency needs, Occupy Santa Cruz has an EMT and other medical professionals on call who respond promptly to medical issues. Occupiers are working with local groups to provide deescalation training and non-violent conflict resolution. Similar to what is offered at other Occupy locations, future plans may include mental health counseling and drug and alcohol treatment.

Since mid-October, Occupy Santa Cruz has a medical working group that stocks first aid supplies, trains potential responders, and has an EMT on-call for emergencies. While people struggle with hunger elsewhere, the Occupy food working group accepts donations of food and feeds hundreds of people at the occupation everyday. Though San Lorenzo Park restrooms are locked at night by the city, Occupy Santa Cruz has three portable toilets and a hand-washing station to address sanitation concerns. For some poorer members in the community, this is their only access to basic medical care, sanitation, and nutrition.