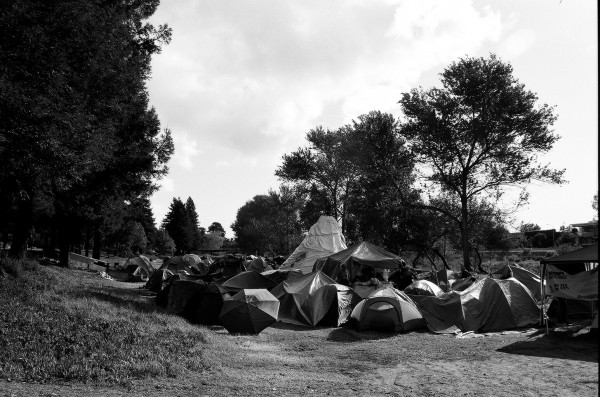 November 20, 2011 - Santa Cruz - Occupy Santa Cruz has been working to address the needs of those abandoned by corporate medical care. In the face of rocketing health care costs, declining county health services, and now exaggerated heath concerns by city officials, members of the local Occupy Movement have been providing basic health services, including first aid, regular meals, and 24 hour sanitation facilities. To address emergency needs, Occupy Santa Cruz has an EMT and other medical professionals on call who respond promptly to medical issues. Occupiers are working with local groups to provide deescalation training and non-violent conflict resolution. Similar to what is offered at other Occupy locations, future plans may include mental health counseling and drug and alcohol treatment.

Since mid-October, Occupy Santa Cruz has a medical working group that stocks first aid supplies, trains potential responders, and has an EMT on-call for emergencies. While people struggle with hunger elsewhere, the Occupy food working group accepts donations of food and feeds hundreds of people at the occupation everyday. Though San Lorenzo Park restrooms are locked at night by the city, Occupy Santa Cruz has three portable toilets and a hand-washing station to address sanitation concerns. For some poorer members of our community, this is their only access to basic medical care, sanitation, and nutrition.

Early last week, Steve Clark of the Santa Cruz Police reported an outbreak of contagious disease at Occupy Santa Cruz, later admitted to be mere rumor. After a visit by county health officers, no tests for scabies or ringworm were ordered or conducted.

"We've seen this tactic used at occupations all over the country in recent weeks," said Burchfield, "Police and city officials exaggerate health and safety concerns, then use these claims as a pretext for attacking the occupations. It's an attempt to 'otherize' the occupiers as homeless, hippies, drug users, violent people, and anarchists."

As the Occupy Movement attempts to address issues of economic inequity, health services for homeless, poor people, and veterans are being cut nationally. With health care costs and unemployment on the rise, everywhere in this country, health care is out of reach of more than 52 million Americans. According to the Commonwealth Fund, an additional 73 million adults had difficulties paying for health care and 75 million deferred treatment because they couldn't afford it.

Here in Santa Cruz county, health services are deeply impacted by state and local budget crises. Medical benefits for the poorest people in the county, including FamilyPACT and Medi-Cal, have been reduced. Santa Cruz County Health Services Agency Director Rama Khalsa said in an interview last year that state and local budget cuts to the program hit the county's mental health and substance abuse programs the hardest. The effect of these cuts is felt on the street as those struggling with mental health or substance abuse issues go without treatment.

According to the National Alliance on Mental Illness, state-supported health care is the “safety net of last resort” for children and adults living with serious mental illness. Both of the two largest sources of funding for mental health services are Medicaid and state general funds, both of which have been drastically cut every year. The state of California alone cut $587.4 million from their mental health budgets between 2009 and 2011. According to NAMI, "Today, after several years of significant budget cuts, thousands of youth and adults living with serious mental illness are unable to access care in the community and are ending up either on the streets or in far more expensive settings, such as hospitals and jails."

http://occupysantacruz.org/
§Request from Medical
by Occupy Tuesday Nov 22nd, 2011 11:44 AM
Since most of our medical supplies were stolen last Saturday, Nov. 19th, our list of needs is long. If you can help, please email jonell - jelenedraj [at] gmail.com