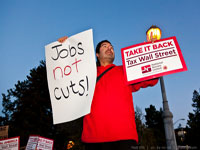 Local Service Employee International Union (SEIU) members participating in the Occupy Day of Action demonstrations which took place on bridges around the country, joined members of Occupy Santa Cruz and members of the local MoveOn.org council to rally at the Santa Cruz County courthouse on November 17 in support of improving and repairing local infrastructure to stimulate job creation. The demonstration began on Water Street Bridge where community members held signs along the pedestrian areas of the bridge. The group made its way over to the front steps of the county courthouse where a rally was held and short speeches were made, including those from a recent UC Santa Cruz graduate who is currently between homes, a representative from the office of assembly member Bill Monning, members of the SEIU, the local MoveOn.org council, and a member of Occupy Santa Cruz. Approximately 100-200 people participated in the event, and afterwards a large part of the group attended Occupy Santa Cruz's general assembly.