Add an Event
Newswire
Calendar
Features
Home
Donate
From the Open-Publishing Calendar
From the Open-Publishing Newswire
Indybay Feature
Publish to Newswire
Add an Event
Related Categories: Santa Cruz Indymedia | Global Justice & Anti-Capitalism | Police State & Prisons
Calling Deputies "Puppets"--Cause For Arrest? Updates from the War Zone
by Robert Norse
Tuesday Nov 15th, 2011 9:44 AM
This is a response to the Sentinel's latest excuse for local reporting ("Santa Cruz officials not expected to dismantle Occupy camp Wednesday" at http://www.santacruzsentinel.com/localnews/ci_19334731). It was originally part of the comments to that Sentinel story. I added several paragraphs and I'm reprinting here as an update. Illness and other obligations have been taking their toll on me, but I'm still getting reports by phone and doing interviews which I'll be playing Thursday night 6-8 PM.
PROPERTY SEIZURES CONTINUE AT PROTEST
After seizing survival tents and protest signs last night (a fact ignored by the First Amendment-challenged Sentinel), Sheriff Wowak's deputies have returned again tonight--according to occupysantacruz twitter--and warned of further officially-orchestrated mayhem to come. In response to the sheriff's "no lodging" (=no occupation) written notices of last night, protesters countered with this notice at midnight a few hours ago when the sheriffs returned with their armed threats: http://twitpic.com/7eeyej .

While City bureaucrats simultaneously talk "negotiation" and drag Occupy Santa Cruz into court on bogus Public Nuisance charges, looks like the deputies may be coordinating their efforts with the attacks on Oakland, Portland, and now NYC (Occupy Wall Street) itself. This assault is a violent move to remove those who so visibly and persistently have said "no" to the economic train wreck the wealthy and powerful are creating. All the while covering their protest-removal with the usual "drugs", "homeless", "poopoo", and "lawlessness" media shitstorm.

A TALE OF TWO COUNCILMEN
At the same time (late Monday morning) that Vice-Mayor Don Lane was meeting with a large group of OSC interesting in hearing his legitimate concerns and expressing theirs, Deputy Chief Steve Clark and other cops were roaming the campground noting down tent details and urging campers to leave with scarestories about a raid "even before Wednesday" (Wednesday is the day of the Injunction hearing).

Lane, Dannettee Shoemaker (head of Parks and Rec), and another city notable took an hour or two to chat with protesters facing Injunction-by-day and Citations-by-night. They also chatted wtih the press and scheduled another meeting--making no promises to do anything. It's unclear but perhaps Lane's only "accomplishment" was to assure people (whether accurately or not is unclear) that yes, OSC can put portapotties down by the campsite. The same tiresome excuses about not opening the perfectly usable park bathroom, of course.

This was in stark contrast to the response of (for example) Berkeley's Councilman Kris Worthington who issued a strong statement supporting specific action and denouncing police abuse. I append this letter below as a separate document, but one worth reading. Admittedly there are strong protests scheduled in Berkeley after the UCPD riot last week, but the contrast between Worthington and Lane is noteworthy. Worthington makes strong statements and commits himself to aggressive action; Lane can't even commit himself to opposing the Injunction (which he concealed on the very day it was being discussed and didn't deny voting for).

Anybody actually seen any verification of the alleged "health" concerns that are being used to smear the protest?

NY JUDGE SAYS NO! TO POLICE RAID
Judge Lucy Billings of the New York State Supreme Court just issued an emergency TRO against the NYPD for their unlawful seizure and destruction of property as well as the unlawful destruction of people peaceably assembled in the midnight raid against Liberty Square (Occupy Wall Street) in NYC. Occupy Santa Cruz supporters need to do the same here given the continuous threats, seizure of tents, false "lodging" tickets, and--most recently--the seizure and failure to return actual protest signs by deputies apparently acting as political enforcers.


OSC activists also reported this morning that deputies in plainclothes roughed up and falsely arrested Austin, a community member, accusing him of tampering with a sheriff's car. Several minutes earlier, a deputy reportedly called in the city cops to complain that deputies were being called "puppets". How could anyone could possibly think this of deputies who've been doing midnight spoiling raids, giving out unconstitutional citations and seizing property and sign?

According to camper Chris. UCSC students Austin and Joe were accosted by another deputy who leveled a false charge against them of ""interfering with a vehicle". Two witnesses reportedly saw Austin slammed against the deputy's car, then arrested along with one of the witnesses. A second deputy in a second car also then reportedly arrived and refused to give his badge number or name. He finally did so after activists stood in front of his car and refused to let him go until he followed proper procedure. Hmm, is Santa Cruz finally beginning to stand up to police state behavior that was previously passed as "business as usual"?

Reportedly two appearances by SCPD officers on the scene were unavailing in persuading deputies to maintain a professional attitude.

You won't be reading about this anytime soon in the Sentinel. But check out indybay.org/santacruz and occupysantacruz facebook or twitter to catch the latest. Or bring down a thermos of coffee and some warm clothing and check things out for yourself. The more eyes, voices, and cameras the better.

Tomorrow at 8:15 AM is the next step in the City's ratcheting up the pressure on the OSC campground with an Injunction hearing. Ed Frey and Steve Pleich will try to have the matter shunted to federal court. Come and observe the smooth workings of the judicial juggernaut.
§Occupy of Santa Cruz
by responds Tuesday Nov 15th, 2011 12:04 PM 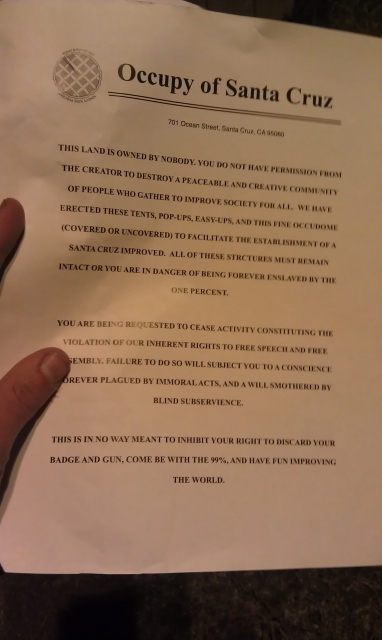 original image (1952x3264)
Add Your Comments
LATEST COMMENTS ABOUT THIS ARTICLE
Listed below are the latest comments about this post.
These comments are submitted anonymously by website visitors.