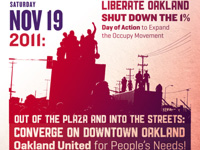 The new occupation was called for by the Occupy Oakland General Assembly on November 17th. Occupy Oakland believes the park and plot of land located at 19th St and Telegraph Ave, and bordered by the Uptown apartment complex and the Fox Theater, is the best location for new re-occupation. They assert that the park and adjacent land offer several strategic and symbolic advantages, noting that the park is located in the uptown neighborhood which is the area that the Chamber of Commerce, the Lake Merritt/Uptown District Association and Downtown Oakland Association, major real estate developers, and city hall are all actively trying to gentrify. These groups represent the interests of the 1% in Oakland and are also the groups that are directly trying to destroy Occupy Oakland.

Occupy Oakland says, "Setting up a camp here will be a symbolic move to put pressure on these groups and send a message that they only look out for the interests of big business and developers, not the needs of all people in Oakland."

National Day of Action Against State Repression of #Occupy