Add an Event
Newswire
Calendar
Features
Home
Donate
From the Open-Publishing Calendar
From the Open-Publishing Newswire
Indybay Feature
Publish to Newswire
Add an Event
Related Categories: East Bay | Global Justice & Anti-Capitalism
Lake Merritt/Uptown District Association calls on Mayor to forcefully end Occupy Oakland
by watcher
Tuesday Nov 8th, 2011 3:43 PM
Mayor Jean Quan and City Council members are debating options for dealing with Occupy Oakland such as forced relocation to areas outside of downtown. Mayor Quan is additionally arranging for city operatives to push a proposal in the General Assembly on Wednesday, November 9th, denouncing protester "violence" such as broken windows, graffiti, and throwing rocks at police. No such proposal regarding denunciations of police violence against unarmed demonstrators seems to be forthcoming from the Mayor's office. Oakland police, most of whom do not live in Oakland and spend their tax-payer funded paychecks elsewhere, have complained that are "confused" when occupiers retook the plaza after their violent actions the day before. The Oakland Metro Chamber of Commerce has been quite vocal with their mantra of "OCCUPY OAKLAND ENCAMPMENT MUST GO! OCCUPY OAKLAND ENCAMPMENT MUST GO! OCCUPY OAKLAND ENCAMPMENT MUST GO!" as they twist the arms of elected officials and try to engender popular support for their position. Now today, the Lake Merritt/Uptown District (business) Association, claiming to be a part of the "99%", has piled on, delivering a letter to the Mayor calling for "forceful action" to end the "social experimentation" of Occupy Oakland. Despite rampant corporate media reports suggesting the contrary, the Association writes that "we do not believe that many, if any, companies have yet made the decision to move out of Oakland" as a result of the occupation in front of City Hall. The Association board of directors say they are "extremely concerned that the City appears to have learned nothing from the damages we suffered during the recent Oscar Grant demonstrations." The Association disingenuously continues that "this is a public space – to be enjoyed by all the people of Oakland," but fails to note that the plaza minus the occupation typically hosts no more than a few dozen downtown workers eating lunch or wandering through during business hours, leaving behind the other 16 hours a day a relatively lifeless wasteland of disenfranchised youth and homeless people who are rousted, searched, arrested, and abused by Oakland police on a daily basis. It seems to be wishful thinking on the part of the Association when they declare that "the protest has been allowed to run its course." 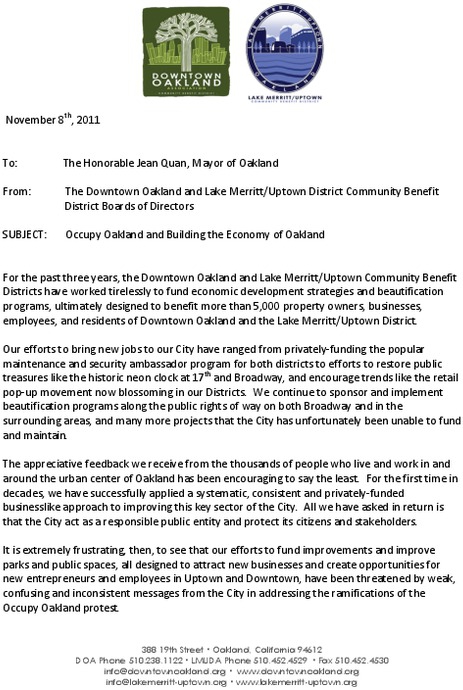 The attached letter, written by the boards of the Downtown Oakland and Lake Merritt/Uptown District Associations, two community benefit districts formed to foster economic growth in downtown Oakland, was sent to Mayor Jean Quan and members of the Oakland City Council earlier today in response to the city's failure to adequately address the consequences to small business and others in Oakland -- including significant damage to businesses and property caused by self-styled 'anarchists' -- of the continued encampment at Frank Ogawa Plaza.

To: The Honorable Jean Quan, Mayor of Oakland

SUBJECT: Occupy Oakland and Building the Economy of Oakland

For the past three years, the Downtown Oakland and Lake Merritt/Uptown Community Benefit Districts have worked tirelessly to fund economic development strategies and beautification programs, ultimately designed to benefit more than 5,000 property owners, businesses, employees, and residents of Downtown Oakland and the Lake Merritt/Uptown District.

Our efforts to bring new jobs to our City have ranged from privately-­‐funding the popular maintenance and security ambassador program for both districts to efforts to restore public treasures like the historic neon clock at 17th and Broadway, and encourage trends like the retail pop-­‐up movement now blossoming in our Districts. We continue to sponsor and implement beautification programs along the public rights of way on both Broadway and in the surrounding areas, and many more projects that the City has unfortunately been unable to fund and maintain.

The appreciative feedback we receive from the thousands of people who live and work in and around the urban center of Oakland has been encouraging to say the least. For the first time in decades, we have successfully applied a systematic, consistent and privately-­‐funded businesslike approach to improving this key sector of the City. All we have asked in return is that the City act as a responsible public entity and protect its citizens and stakeholders.

It is extremely frustrating, then, to see that our efforts to fund improvements and improve parks and public spaces, all designed to attract new businesses and create opportunities for new entrepreneurs and employees in Uptown and Downtown, have been threatened by weak, confusing and inconsistent messages from the City in addressing the ramifications of the Occupy Oakland protest.

What’s more, we are extremely concerned that the City appears to have learned nothing from the damages we suffered during the recent Oscar Grant demonstrations last year, all of which were carried out by a small group of thugs who used the occasion to blend in to a group of peaceful protestors to wreak their havoc.

We, as Americans, support the right of peaceful protest and freedom of speech, but the lack of an on-­‐point “Oakland is business friendly” message is nationally embarrassing and counterproductive to all of the various efforts in this community to create a business friendly environment, business revenues and jobs in Oakland. Frankly, the City Council and the current administration have been naive in their handling of this latest protest and we are calling on them to make decisions that will help bring jobs and businesses to Oakland instead of driving them away.

We do not understand the reasoning behind the decision to let the protest re-­‐establish the 24/7 tent city in Frank Ogawa Plaza. Unlike Zuccotti Park in New York, this is a public space – to be enjoyed by all the people of Oakland, not just a minority who have now had their moment and headlines. It is time for them to move on.

Perhaps the City needs to move on as well, focusing on identifying the small gang of primarily non-­‐Oaklanders who break off from legitimate protests to break windows, light fires and spray graffiti.

We also do not understand the apparent disinterest among some of our elected leadership to at least minimize or make efficient the exorbitant cost to taxpayers of allowing this demonstration of free speech to continue indefinitely. We have spent millions with no exit strategy in sight, while nationally even the Occupy movement itself has found more effective means, like bank transfers, to make their impact heard. It's time for Frank Ogawa Plaza to be given back to the people of Oakland, and the disruptions to our businesses, workers and Downtown residents to end.

What are Oakland voters meant to think of this continued indecision (if not a lack of decision) by our leadership? How do we, with skin in this game and our livelihoods on the line, make sense of decisions that put personal feelings and opinions against the wellbeing of all citizens?

You may be surprised to learn that we do not believe that many, if any, companies have yet made the decision to move out of Oakland based solely on the events of Wednesday, November 2nd.. Our districts have seen the consistent creation of new inner city small retail for the first time since the BART construction nearly destroyed Broadway in the 1970s. In recent weeks, however, our City leadership has done more to threaten those new business possibilities than any construction project ever did. What we fear most is that the fear mongers are going to create a self-­‐fulfilling prophecy, and that we will be even more challenged to repair that damage.

If our leadership allows indecision and chaos to take place again, the naysayers both inside this community and from without would be allowed to shape a misperception. Unfortunately, we may even be witnessing a self-­‐fulfilling prophecy here, one that goes against the common sense of recruiting jobs and business, and the revenues that are needed to rebuild this City. It is antithetical to the future health of this community to belabor the perception that Oakland is moribund rather than fighting back as a strong vibrant business and citizen community.

It is ironic that our Mayor and City Council do not seem to grasp that our businesses and economy are based on the so called “99 percent”; the small businesses, shop owners, restaurateurs and café owners, not-­‐for-­‐profits, young entrepreneurs. All have suffered in the last few weeks because the city has not stood up forcefully on their behalf. Failure to support our underlying economy will further undermine a city already hindered by the economic recession.

All the while, and because of our efforts here in the Districts, our Districts have seen the creation of 1,200 jobs and the growth of a small cadre of restaurants, digital entrepreneurs, and retail stores in once empty storefronts.

It is time that Oakland spoke with one voice to deliver a consistent message to its citizens and especially the country, that Oakland is – has been and remains -­‐-­‐ friendly to employers.

The protest has been allowed to run its course. Now it’s time to focus on jobs and the economic restoration of our city. It’s time for bold leadership and forceful action, not unending social experimentation. We call upon the Oakland City Council and the Mayor of Oakland to step up and provide cohesive, common sense leadership -­‐-­‐ before it really is too late.

We are business people and committed defenders of our great City, not apologists or politicians. We are not going anywhere. Oakland is our home and we are rebuilding our marketplace for all of Oakland not just a chosen few. We call on our leadership to do the same.