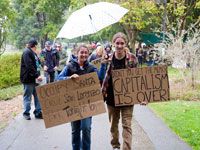 Updates: Relocation to the Courthouse

Occupy Santa Cruz rounded out its first day on October 6th with a major decision by the group to change the location of the occupation to Mission Plaza. The occupation began with a long day of organizing. Late in the evening, a group of a dozen or more remained; people continued to discuss the movement, they cooked their meals, and some set up places to sleep in San Lorenzo Park.

A march was called for Friday, October 7th, leaving at 3:30pm from the Santa Cruz Mission Plaza, and touring the national financial institutions located downtown. General assembly meeting will proceed at 6pm on weekdays, and 2pm on Sundays, at Mission Plaza.

Occupy! zine: an intro to consensus, your rights, and occupation