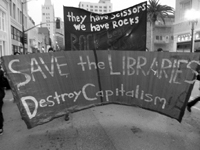 From the Streets of Oakland: Report on Anticut 1
"Bay of Rage" Summer Series of Anti-Austerity Protests Underway in Oakland

Bay of Rage writes: Thanks to everyone for coming out to Anticut 1 on Friday [June 3rd]. The consensus seems to be that this was a very successful evening, a promising opening act to what we hope will be a long, hot summer. There were probably about 100 of us in the streets — good turnout for something organized with only a couple of weeks of notice, especially after a period of relative quiet. Let's see if we can double this next time [on June 17th].

We [gathered] at Telegraph & Broadway. We chose this spot not only because it opens onto a network of streets and therefore seems tactically strong, providing us with a number of ways to exit, but because it sits at the meeting point of two major East Bay thoroughfares. One of these, Telegraph, ends on the other side at UC Berkeley, and for many of us, joining (or finding points of connection between) the rebellions of Oakland and the campus rebellions of the last couple of years has been a really important, if unfinished, endeavor. This is also the place where the 1946 Oakland General Strike began.

One of the things we want to do with this summer project is to create a territory, to mark specific spaces with specific values, habits, ideas. What if the triangle where Telegraph and Broadway meet was known as a gathering point for anarchists and antistate communists? What if we could be certain that, every Friday night, there were going to be people there, ready to make things happen? What if we had a space where we could be certain to find each other when shit goes down?