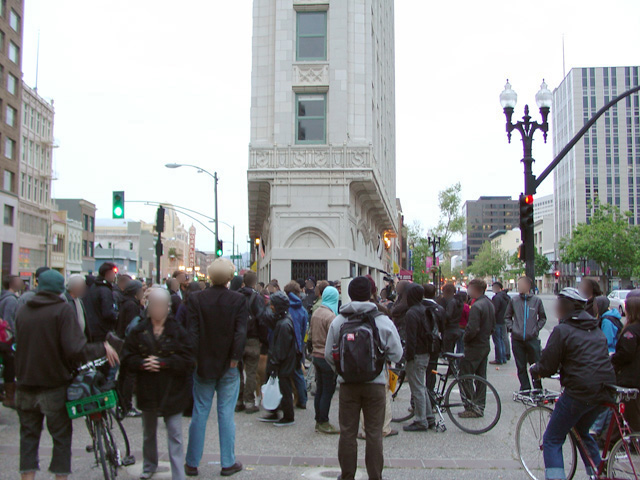 
Participants gathered at the intersection of Telegraph and Broadway, then marched up Telegraph Avenue two-lanes-wide with a mobile sound system toward the monthly First-Friday Art Murmur. The energy of those at Art Murmur, normally largely confined to 23rd Street between Telegraph and Broadway, was pulled outward to the street on Telegraph by the Bay of Rage crowd -- with music, dancing, and a hip hop performance by Eddie Falcon. From there, a larger-sized Anticut street party continued up Telegraph and turned on 25th Street, pausing again in front of a couple of the new higher-end art galleries that have sprung up in warehouses which formerly housed auto mechanic and other industrial businesses. The final destination of the roving street party was the parking lot at 25th and Broadway, where the dancing continued and several short films were screened. Along the way of it all, bystanders cheered on the march and participants handed out thousands of fliers declaring the critical need to reclaim public space in Oakland.

The next Anticut action is scheduled for June 17th. For more info: http://www.bayofrage.com 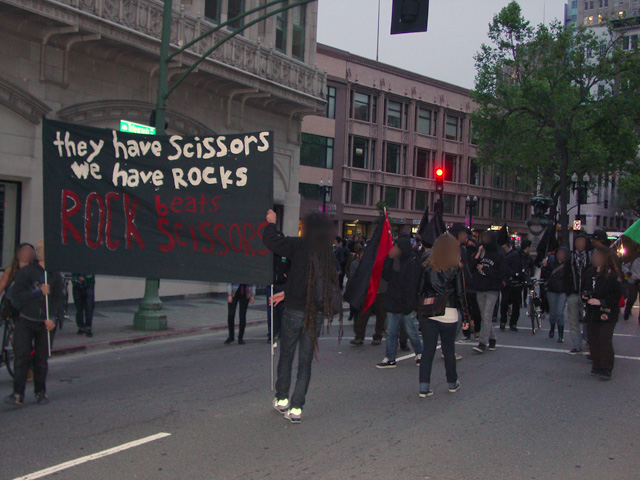 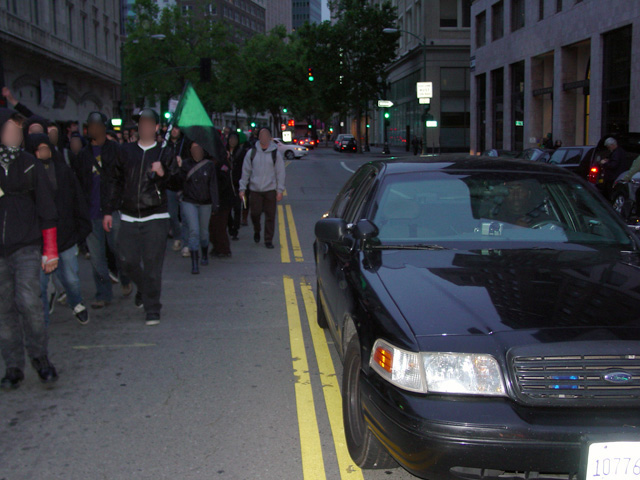 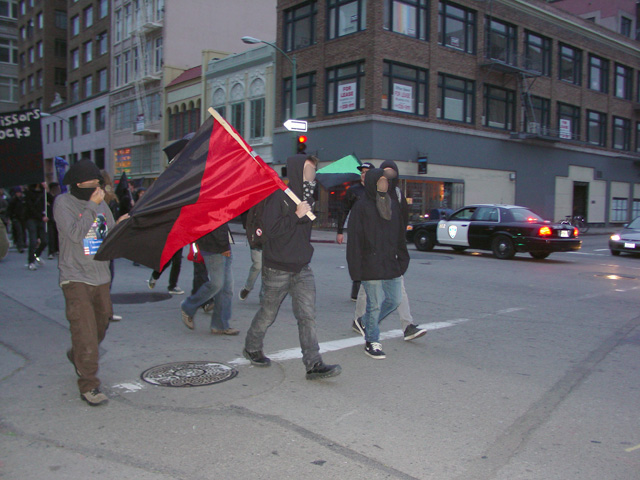 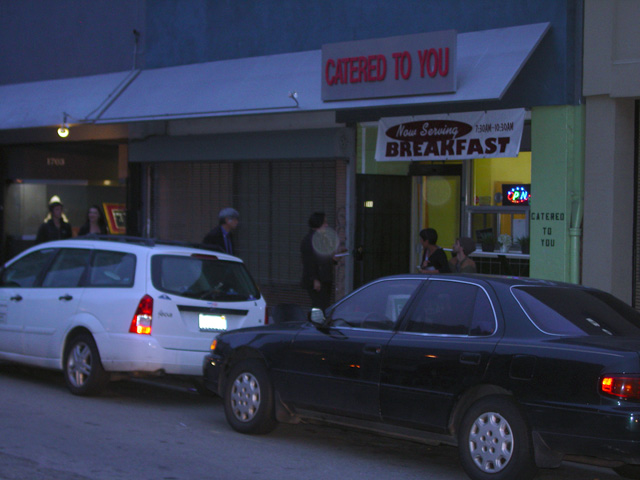 The light spot in front of Quan is just a fluke of taking pictures with a flash at dusk.
http://www.indybay.org/newsitems/2011/06/0...
§Heading through the newly-designated Uptown District, passing the refurbished Fox Theater
by dave id Thursday Jun 9th, 2011 1:13 AM 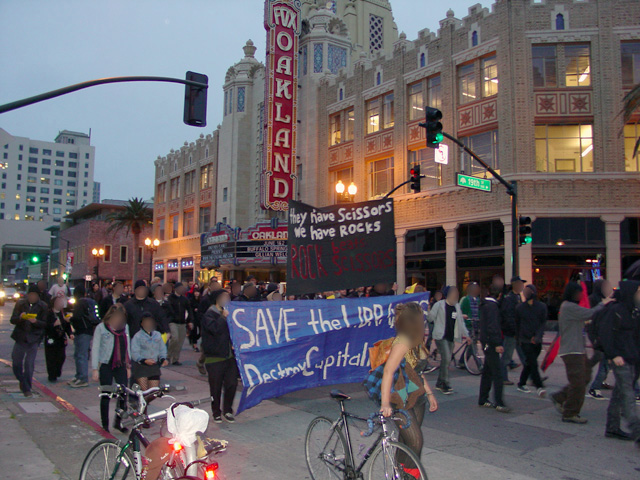 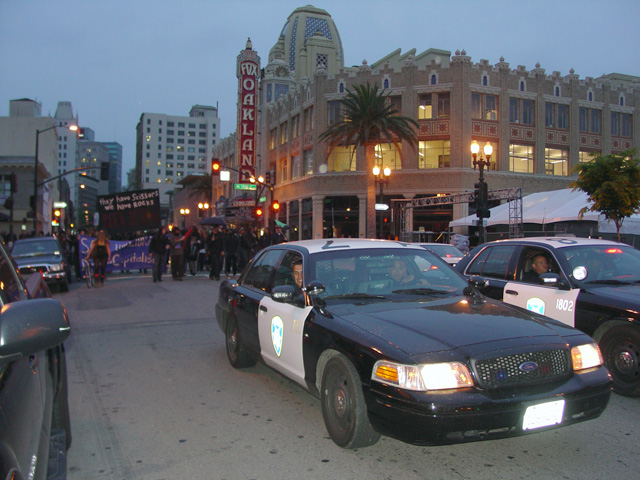 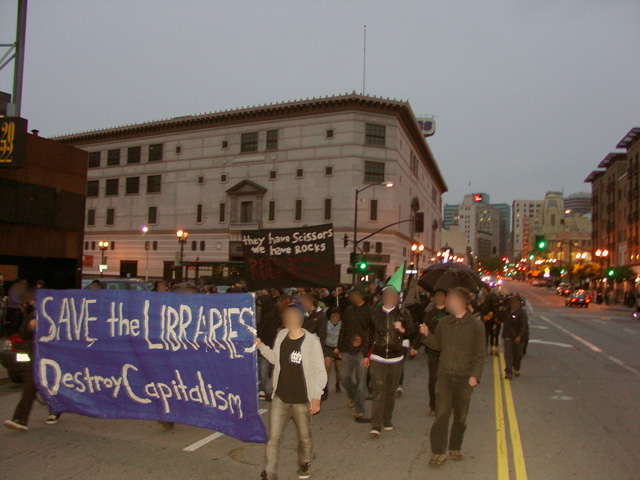 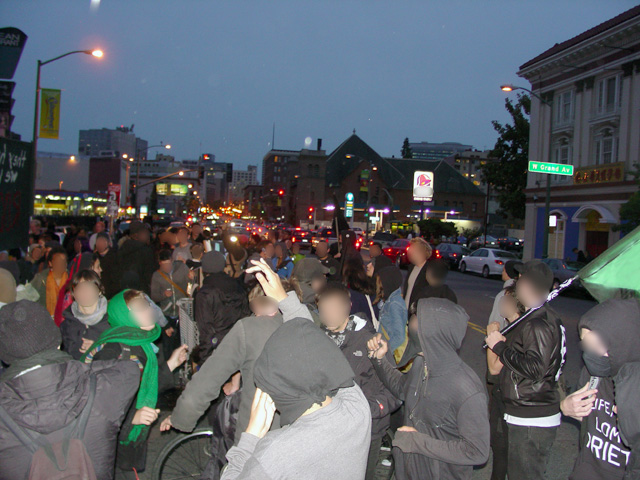 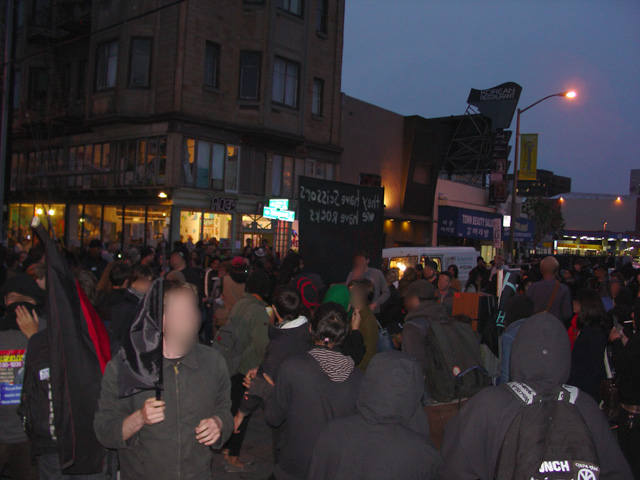 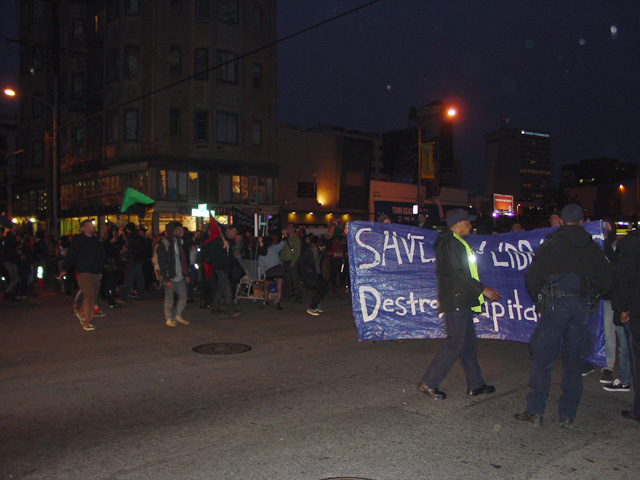 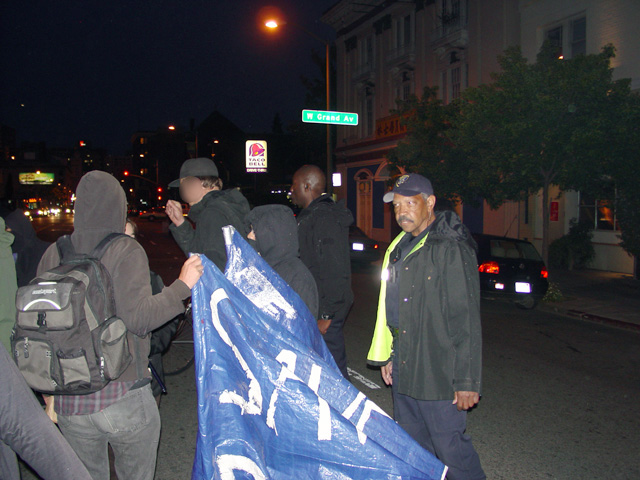 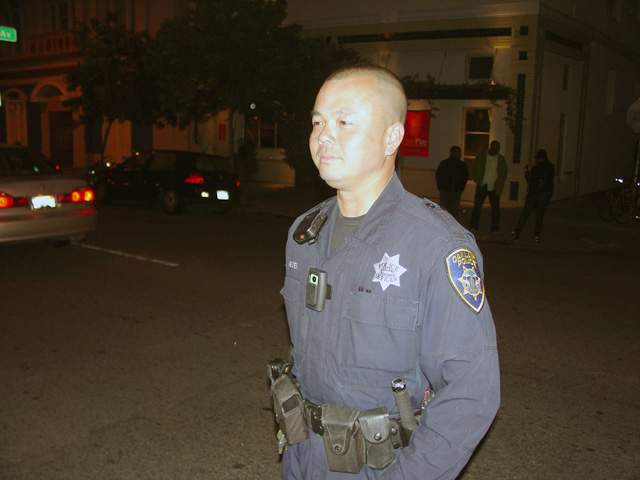 Most faces have been blurred in this post, in a nod to the Bay of Rage report on Anticut #1 (http://www.indybay.org/newsitems/2011/06/05/18681161.php), but it also adds a bit of creative mystique to the action. It is not necessarily any guarantee of security or privacy for participants. This stylistic blurring in no way should assure anyone that they weren't filmed or photographed multiple times by any number of hand-held, street-mounted, chest-mounted, or car-mounted cameras along the way.
http://www.indybay.org/newsitems/2011/06/0...
§Restore Services! Tax the Rich and Corporations! (U.S. Uncut shirt)
by dave id Thursday Jun 9th, 2011 1:13 AM 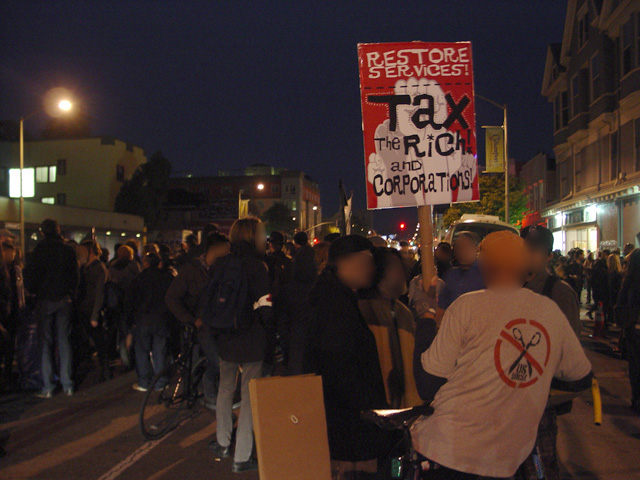 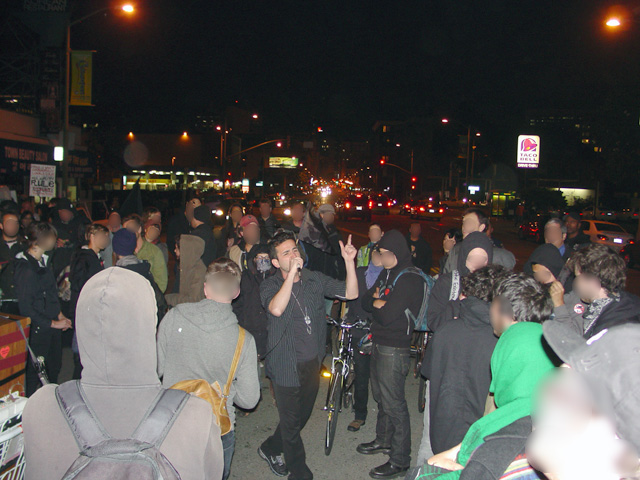 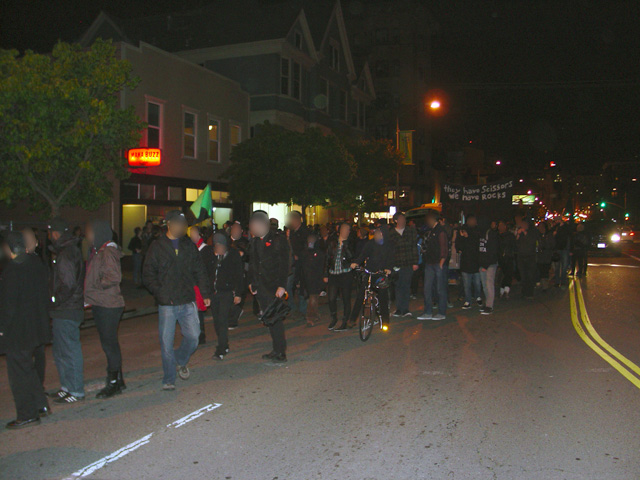 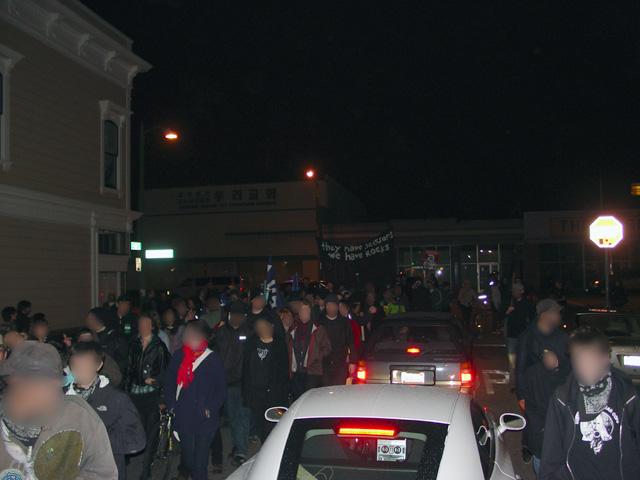 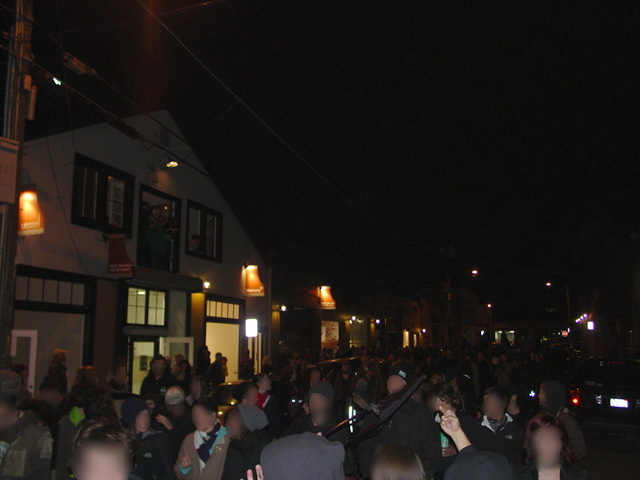 Art Murmur has expanded over the years, from just 23rd Street now all the way up to 26th Street, although the crowds rarely if ever block Telegraph Avenue as the Anticut action did this evening. Art Murmur, as with the "Uptown District" itself, is very slowly but consistently in the process of gentrifying and yuppifying. (Note the finger directed towards those hanging out of the balcony above.) While the First-Friday event was never a political event per se, it is more apolitical now than ever, and one intent of Bay of Rage organizers in timing their street party with Art Murmur was to tug it away from complacency as governmental austerity measures such as closing the majority of Oakland's public libraries become the norm.
http://www.indybay.org/newsitems/2011/06/0...
§Paying for their crisis? Not my job
by dave id Thursday Jun 9th, 2011 1:13 AM 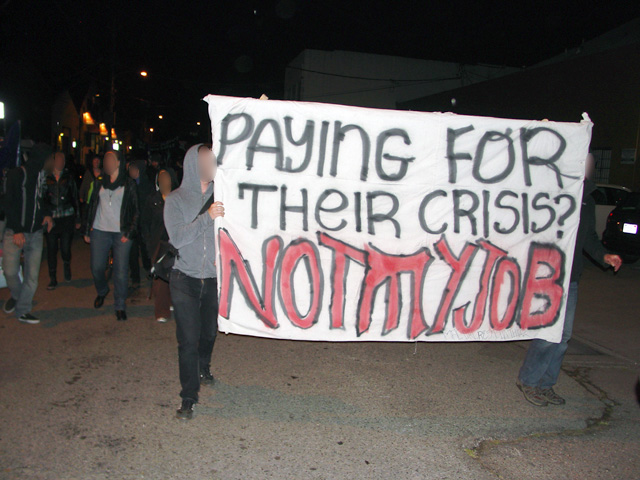 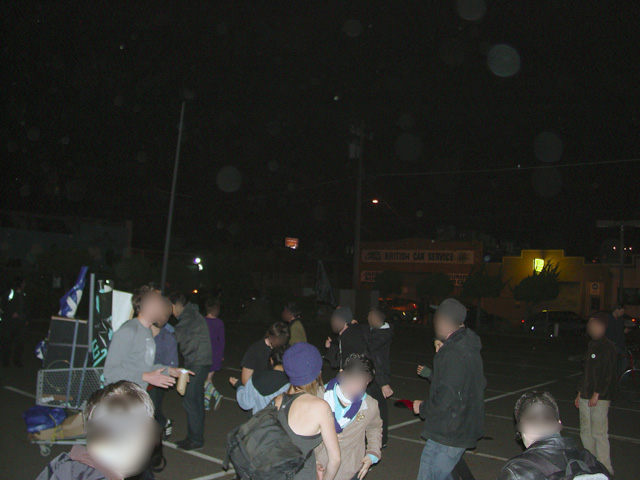 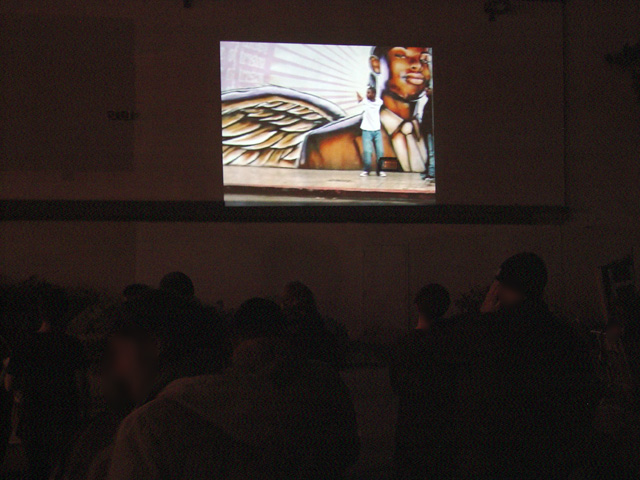 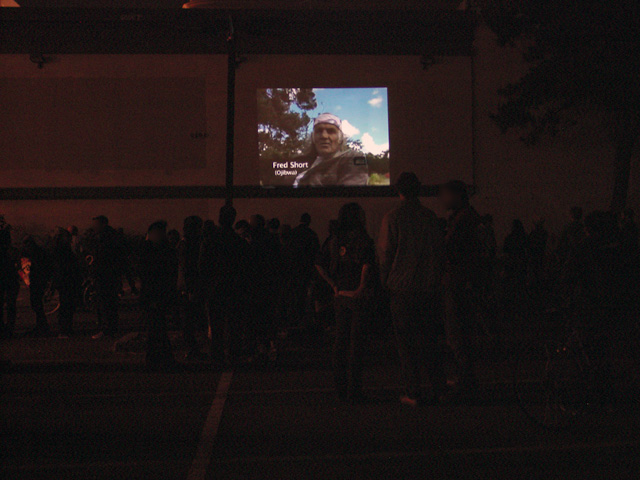 http://www.indybay.org/newsitems/2011/06/0...
Add Your Comments
Support Independent Media
We are 100% volunteer and depend on your participation to sustain our efforts!