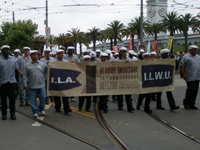 The San Francisco Labor Council has called for the full support of ILWU Local 10 after it was sued by the PMA (Pacific Maritime Association) for the participation of its members in a "We Are One" solidarity action with Wisconsin workers which shut down the ports in Oakland and San Francisco on April 4, 2011. A resolution was passed unanimously at the San Francisco Labor Council on April 11th and the first emergency defense meeting to organize for action and solidarity will take place on Thursday, April 14th at 7pm. Individuals and other unions are encouraged to come and show support.

On April 12th, approximately 18 ILWU members from locals 10, 6, 54, and SEIU 1021 held a sit-in at the offices of the PMA in Oakland in response to the lawsuit and to protest the lockout of their members in Concord. The PMA refused to meet with the delegation. After several hours demonstrators decided to leave for a rally at the entrance of the building. They were joined by other members who had left the docks to support them.

Previous Related Indybay Feature: We are One Rallies in Solidarity with Wisconsin on April 4th