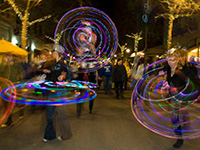 On New Year's Eve, as it has for the past six years, Santa Cruz hosted the DIY New Years Parade, what has become both a homespun, family-friendly alternative celebration and a controversial embarrassment for the city. The result of six years of do-it-yourself community organizing, the Last Night DIY Parade, a community-sponsored New Year's Eve celebration again hit Santa Cruz streets.

However, because of its lack of official sanction, civic leaders have opposed the celebration from the beginning. "While the police and civic leaders try to frighten us with the specter of downtown violence, we just want to participate in a communal celebration with our neighbors," said Elizabeth Burchfield. "We are tired of being afraid. It's time to organize together."

According to the Last Night DIY website, the parade, from its beginnings in 2005, was not about merely celebrating, "but celebrating what we as a community can do ourselves, without corporate or city-sponsorship. It is a celebration of both our autonomy and the support we offer each other."

This year on New Year's Eve, the DIY Parade met at 5pm near the Saturn Cafe parking lot on Pacific Ave and Spruce Street. (