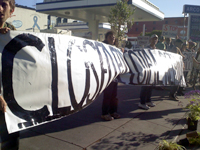 Since the April 20th BP oil spill began in the Gulf of Mexico, a number of related protests have been held across the country and locally. On June 11th, a group of bikers blocked entrances at a BP owned ARCO gas station at Fell and Divisadero in San Francisco. The demonstrators were protesting the environmental outrage in the Gulf of Mexico, as well as a dangerous bike lane that is perennially blocked by cars lining up to enter the station.

Michael Steinberg reports: "The message is clear at the ARCO gas station at the corner of Fell and Divisadero streets in San Francisco: $2.99. That once extravagant price for a gallon of gas is now considered cheap, and continually draws heavily oil addicted drivers in need of a quick fix.

"In doing so, the drivers’ vehicles habitually sit in the bicycle lane that runs down Fell Street while awaiting entrance to the mainline pumps. This in turn forces bikers into the race car traffic roaring up Fell, and injuries to two wheelers are consequently also habitual.

"But that message changed today when dozens of protesters blocked the two entrances off Fell into the station. They filled the entrances with potted plants, blocked them with their bodies, with banners, with a bike powered sound system whose beats inspired dancing and whooping and carried their message to the neighborhood and beyond."