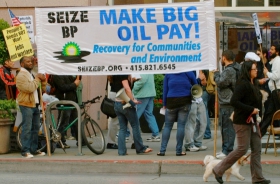 On April 20th, an explosion occurred on the Deepwater Horizon's oil drilling platform killing eleven workers. The oil platform burned for more than a day before sinking on April 22nd, releasing 5 to 25 thousand barrels of oil daily into surrounding waters. At the time of the explosion, the rig was on BP's Mississippi Canyon Block 252, referred to as the Macondo Prospect, about 41 miles off the Louisiana coast in the Gulf of Mexico.

Transocean Ltd. owned and operated the Deepwater Horizon platform under contract to BP Exploration and Production Inc. A production casing was being run and cemented at the time of the accident. Halliburton has confirmed that it cemented the Macondo well but never set a cement plug to cap the bore as "operations had not reached a stage where a final plug was needed". Halliburton said that it had finished cementing 20 hours before the fire. The rig's blowout preventer, a "fail-safe" device fitted at the source of the well 5,000 feet below sea level, did not automatically cut-off the oil flow as intended when the explosion occurred. In the first two weeks after the rig sank, BP sent six remotely operated underwater vehicles to close the blowout preventer valves, but all attempts failed. On May 7th, BP tried to drop a 125-ton dome over the largest of the well leaks to pipe it to a storage vessel on the surface, but this failed due to buildup of frozen methane hydrate crystal. The well was still leaking as of May 13th and many are saying the spill could be the worst environmental disaster in US history.

On Wednesday, May 12th, Seize BP held a protest in front of the BP offices on New Montgomery Street in San Francisco to demand that the U.S. government seize BP and all its assets.

On Friday, May 14th at 5pm, Act Against Oil held a demonstration in Berkeley at the site of a new BP building under construction next to the UCB campus. Event Announcment