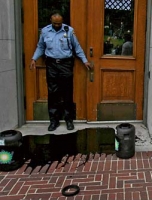 On Thursday, March 1st, approximately 150 people gathered in front of the University of California, Berkeley administration building, California Hall, to protest the proposed agreement between the university and British Petroleum.

The event was publicized as a clean-up of a toxic oil spill at California Hall. Two students wearing British Petroleum lab coats were detained after dumping a mixture of molasses and water, resembling crude oil, at the entrance of California Hall. Reposted Articles, Photos and Videos of the demonstration.

The agreement was made public on February 1st at a press conference with Governor Arnold Schwarzenegger , will fund a Energy Biosciences Institute at Berkeley. An on campus BP Laboratory will develop proprietary plants and microbes through genetic engineering. The deal is receiving widespread criticisms due to the top down implementation and privatization of a public university. Analysis of BP-Berkeley Agreement