Major Protest to Shut Down Fell St. ARCO (BP) in SF on Friday

by Joshua Hart
Bay Area residents horrified by the worsening oil spill in the Gulf are planning to take their protest to the streets on Friday, and attempt to peacefully shut down one of the busiest gas stations in San Francisco- the Arco station at the corner of Fell and Divisadero Streets- which sells BP fuel. 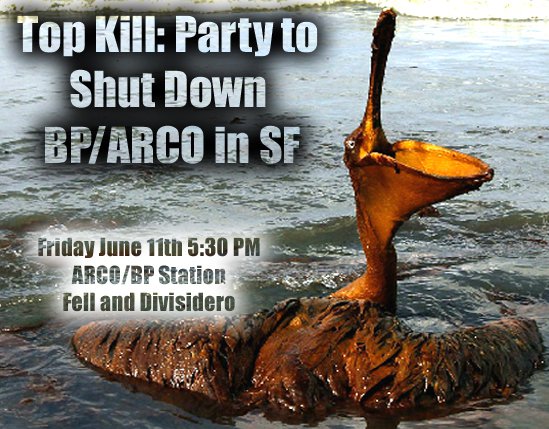 MAJOR PROTEST TO SHUT DOWN FELL ST. ARCO (BP) IN SF ON FRIDAY
Connection made between bicycling conditions on Fell St. and catastrophe in the Gulf

Bay Area residents horrified by the worsening oil spill in the Gulf are planning to take their protest to the streets on Friday, and attempt to peacefully shut down one of the busiest gas stations in San Francisco- the Arco station at the corner of Fell and Divisadero Streets- which sells BP fuel.

Organizers claim that the station is not only directing major profits to a company who is criminally negligent in destroying human and wild life in the Gulf- it is also endangering people who are choosing a socially beneficial way of getting around. At this location- one of the busiest gas stations in the City- long queues of cars frequently obstruct the Fell St. bicycle lane, the only level cross town bicycle route between downtown and the western part of the City, forcing cyclists into speeding traffic.

“We are not calling for a boycott of BP/ Arco in particular, as this will do nothing to prevent the next spill or prevent climate catastrophe, says Joshua Hart, a Menlo Park resident with a Masters degree in Transportation Planning. “However, boycotting all oil by cutting our flying and driving will reduce the need to drill in ecologically sensitive areas and reduce the immense power that oil companies seem to have over our government.“

Jason Henderson, a Geography professor at SF State who grew up in New Orleans, is saddened and distraught at the images coming out of the Gulf. “The oiled and dying wildlife in the wetlands I used to visit as a child, five years after the destruction caused by Hurricane Katrina to my home city are both linked to our dependence on oil. It is just senseless when people want safe and viable alternatives to the automobile. Why isn’t our government acting with more urgency to provide these choices?”

Protest organizers suggest that a complete network of safe bicycle lanes can offer people alternatives to driving alone. Here in San Francisco the demand for a comprehensive urban bicycle system is widespread. According to a 2007 Binder poll, 75% of voters in San Francisco support new bike lanes and infrastructure.

Robin Levitt, longtime San Francisco resident, Detroit native and protester says “BP/ARCO cares as much for the suffering of the birds in the Gulf as they do about the person on a bike who risks injury or death having to swerve around cars blocking the bike lane just to get cheap gas at their station. On Friday we will stand with the pelicans, turtles, and dolphins suffering from the spill, knowing that if we fail to end our oil addiction, we will not be far behind them.”

Where and when: The protest is scheduled for Friday, June 11th 5:30pm at the Arco station on the corner of Fell and Divisadero streets in San Francisco. 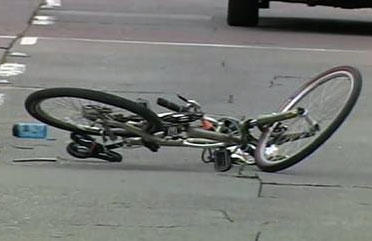 END_OF_DOCUMENT_TOKEN_TO_BE_REPLACED
Add Your Comments
Latest Comments
Listed below are the latest comments about this post.
These comments are submitted anonymously by website visitors.
TITLE
AUTHOR
DATE
Bloomberg: think about the poor shareholders!
get a load
Support Independent Media
We are 100% volunteer and depend on your participation to sustain our efforts!