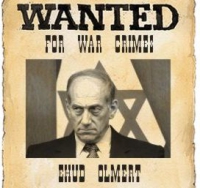 On Thursday, October 22nd, Ehud Olmert, a war criminal and Israel's former prime minister, will be speaking at the The Westin St. Francis Hotel in San Francisco for the World Affairs Council. During his last weeks as Prime Minister of Israel, Olmert unleashed a horrific war on the people of Gaza, that left over one thousand dead, a majority of them unarmed civilians, and hundreds of them children. It destroyed thousands of homes, leaving tens of thousands homeless. A demonstration organized by Stop AIPAC, calling for Olmert's prosecution for war crimes will be held at Union Square at 5:30 PM.

During Israel's offensive on Gaza many hospitals, schools and homes of civilian people were devastated. Israeli forces used explosives containing white phosphorus which are forbidden by international law in civilian fields.

During his presidency Olmert have also approved the 2006 Israeli invasion into Lebanon, after two Israeli soldiers were kidnapped by the Hizbulla. Olmert refused to negotiate an exchange of POW, and instead pushed for a full attack on Lebanon where more then 1,200 people were killed. Currently, Olmert is facing charges in Israel for corruption and bribery. Read more