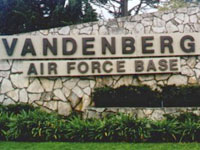 Shortly before midnight on Sunday, June 28th, a demonstration will begin at Vandenberg Air Force Base to protest the U.S. launch of a Minuteman III nuclear missile. The target of the rocket is the Ronald Reagan Ballistic Missile Defense Test Site, Kwajalein Atoll in the Marshall Islands, South Pacific.

The protest will be held at the front gate of Vandenberg AFB, located at the intersection of Highway 1 and Casamila-Lompoc Road, which is six miles north of Lompoc on Highway 1 in Santa Barbara County, CA. The protest is sponsored by the Women’s International League for Peace and Freedom and the Global Network Against Weapons and Nuclear Power in Space. Andrew Lichterman of the Western States Legal Foundation will speak at the front gate rally.

Tony de Brum, a Member of the Kwajalein Parliament, writes, "Kwajalein has not gotten the attention it needs to straighten out the mess created by the Military programs it hosts. The displacement of the population and its living conditions on Ebeye continue to plague a society whose only crime against the powers that be was to be living in an atoll the US found attractive for first, nuclear testing, and now, the testing of the vehicles to carry those nuclear weapons around the world."

Bruce Gagnon, coordinator of the Global Network Against Weapons & Nuclear Power in Space, notes, "We must become 'dehypnotized' so we can see things as they are. The US uses the fear of other nuclear pipsqueak nations to get our own citizens to support massive US military buildups that are all about dominating the world. If the US was genuine in wanting other nations to stop the development of their nuclear capability then we'd lead by example, as is required by the United Nations Nuclear Non-Proliferation Treaty (NPT), and we'd get rid of our own evil WMD." Read more