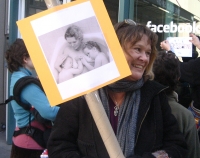 A controversy began in 2007 when a young mother's profile photo of her nursing her infant suddenly disappeared from the social networking website Facebook. There was no explanation as to why the photo was removed, and Facebook has not responded to her inquiries. Despite queries from other women who have found similar family photos removed over the last year, Facebook still hasn’t changed its policy.

On December 27th, about twenty demonstrators gathered in front of Facebook's headquarters in Palo Alto to protest discrimination against nursing mothers. They told members of the press that in some cases their family pictures have been reported as "obscene" and they have been warned by Facebook that if they repost the photos they risk being banned from the online site.

At the same time that the group raised their concerns in interviews, chants, and song in front of Facebook's office, a virtual “nurse-in” was taking place on Facebook itself. Online demonstrators changed their profile photo for the day, to a picture of a nursing child. By Saturday evening, with hundreds joining per hour, over 70,000 members had joined the "Hey Facebook, Breast-feeding is not Obscene" site.

"Breast feeding is beautiful and to hide it in shame is absurd. Facebook’s removal of our pictures sends the wrong message to new moms," said a mother who nursed her baby as she stood in front of the company's headquarters on University Ave. Several older, experienced mothers also came out in support of the demonstration. One grandmother who came with her daughter-in-law and grandbaby in arms said that breast milk is the healthiest source of nutrition for infants and should be encouraged, not discouraged by labeling it has Facebook has. A member of the Raging Grannies summed up the feeling of many saying, "female breasts are not obscene, Facebook's attitude is!"